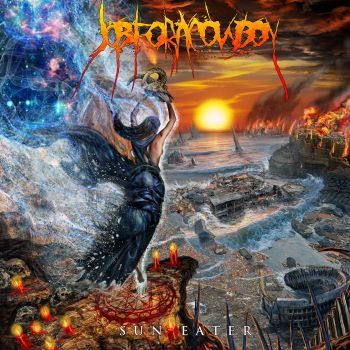 Nowadays, when I think of Job For A Cowboy, the first thing I turn to isn't Genesis. It isn't Doom, either. It's this. Their fourth, mosrt recent full-length record released once again under Metal Blade Records shows the band continuing to grow technically, compositionally, and most importantly, musically.

Sun Eater marks yet another change in the Job For A Cowboy soundscape. This time instead of gnawing their teeth deeper into the sordid underbelly of corrupt politics and dirty underhanded corporate goings on using technically proficient death metal, they've decided to dig their claws wholly into the realms of fantasy and the supernatural using a dizzying, more progressive side of death metal. It's not uncommon for bands to touch on topics far and away different from what they're used to, but this time, it seems like JFAC is really leaving their comfort zone in terms of their writing because they've written something unique that stands out boldly from every other release up until this point.

Jonny Davy and his team have composed of nine songs adding up to 46 minutes of progressive death metal goodness. Swirling labyrinthine guitar passages from dual guitarists Alan Glassman and Toni Sannicandro give the album a palatable taste that sounds a little less technical than previous releases, yet is a bit more approachable and less savage in its approach, leaving you with songs that are easier to digest than on Demonocracy. I enjoyed that album, but I felt the production and the intense battery of insane playing made the album a bit too much to take in on top of sounding a bit too generic to stand out in a crowd of a thousand other technical death metal bands. To me, this album feels like a conscious move to adapt their sound more in a drastic attempt to avoid being pigeonholed even more into the most faceless sub-genre in death metal history. I have to give the band props, they succeeded with Sun Eater.

Once more, Davy's vocals continue to be as indecipherable as ever. One reviewer pointed out on one of their albums his vocal style is the equivalent of screaming with a swollen tongue. I happen to think he sounds more like he's swallowing it instead. But however his vocals sound like to whoever listens, it's almost impossible to make out what he says without the lyric sheet in front of you. You'll be thankful because in my opinion, Davy is one of the most darkly poetic writers. I have two favorite songs on here related to that. The first would be 'Encircled By Mirrors', where Davy elucidates in short, albeit visually stunning detail about teeth gnawing through his eyes to give him clarity of perspective, or perhaps the potential to conceive of a newly discovered reality within his own pathologically warped psyche.

A sample from that:

I find myself wincing
As they chew through my optic flesh

Layers of teeth
Dancing, waltzing
Their way out of my now punctured face"
-Track 7, 'Encircled By Mirrors'

The other one is 'The Synthetic Sea' which features guest vocals from current Cannibal Corpse and ex-Monstrosity vocalist George "Corpsegrinder" Fisher. This song I really appreciate lyrically because of its bluntness where it seems to be taking a direct shot at organized religion and the complacent way we as a species feed our collective ignorance to the belief in a nascent God that is not evidenced to have ever existed. The way we put our trust in the priests, church leaders, and false prophets whose only intent is to deceive is put on clear display in this song. It's as the song says, we are so simple, so damned naive. Couldn't have said it better myself.

Two more things about this album that's great are the bass and drums. Nick Schendzielos, their bassist, replaced Brent Riggs after Ruination, and while Brent Riggs was the cog in their wheel and contributed some amazing bass work to the band that's memorable and awesome, Nick serves to be a fine replacement. His technique on their last full-length shone through in the production which gave his bass a really vicious thump, though how it was produced sacrificed some of the low end for a kind of trebly up-front rumble that ultimately sounded run of the mill. At the end of it all, I assure you, Nick Schendzielos is no run of the mill bassist. This man knows his stuff. The production style here is a huge change of direction. It sounds like it was deliberately mixed in a way that made the bass stand out the most. It clearly is the most dominating instrument, that goes without question, meaning you can easily hear the bass without any problems. And to be honest, his performance here is not bad. Not bad at all. 'Sun Of Nihility' is clearly his best performance yet with JFAC. Session drums were handled on this album by Danny Walker. While we don't get the same unbridled head spinning technicality of The Charn, Danny Walker still proves his meddle. The drop in obvious technical drum work is no great loss on the part of the band since there's still plenty of crazy work going on behind the kit to keep one guessing.

The album ends with the six-minute dirge, 'Worming Nightfall'. Job For A Cowboy has always been known for their epic closers. This song is no exception. With its crawling pace that has that early progressive doom/death vibe akin to Opeth and every band member continuing to impress, each minute that passes leaves you wanting more by the time it ends. Maybe a bonus track or a couple live cuts of their older material would've made this album even more delicious to own because this album is like a drug. Once I finish, I always need more. Just a spot, y'know?

Lately, we've not seen the band be very active. Their tour bus caught fire, destroying all their equipment, and they haven't performed live in almost two years. Who knows what the future holds in store for Job For A Cowboy and their very divisive fanbase. Their reputation in the metal world may be spotty, but I will say this. Regardless of what trials await these four individuals, they will always have a special place in my dark heart. So will this album.