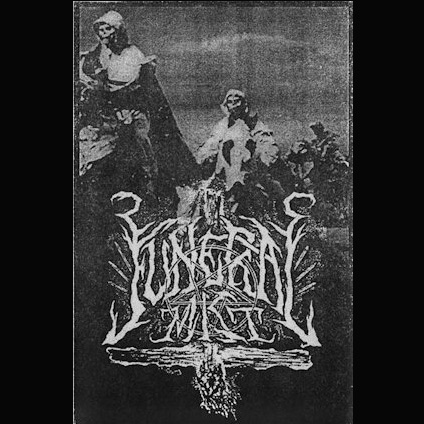 Funeral Mist’s 1996 demo is the first glance at Arioch’s (Mortuus for Marduk) amazing multi instrumentalist compositional talent. The inclusion of a drummer in the recordings gives the sound of the project a more compact and solid feel; because string players usually don't excel at playing drums, so their ideas can be better executed by actual drummers, which I consider a plus over one man bands like Burzum. This demo's particular limitation is the production, it's just what you can expect: bedroom studio black metal. There's ground noise everywhere, in fact; that's the element that puts every track together in the mix, the volumes are correctly leveled though and the roughness of the mix kind of fits the music, being the genre black metal.

Composition wise, the songs have a stronger old school black metal influence than let's say, an album like Maranatha, but they are still willing to experiment with simple studio fx atypical in black metal; like the panning game in the intro of 'Hellspell', one of the band's trademarks sounds. However, the better parts of the album are the raging blasts beat parts accompanied by those extremely profound, cold and mean but still melodic guitar lines. The drummer as I said before is pretty competent: solid double bass drums and hyper fast blast beats. Drum breaks aren't particularly complicated but are so aware of what the riffs resolve that they sound super concise. Guitar distortion modeling is super acid, lots of treble and reverb and not enough body and weight; but then again, it's black metal so it's OK. The riffing is merciless in terms of intensity, songs never fail to deliver despite the tempo used on every bar’s beat. At any speed they manage to create amusing passages that flow nicely together, above average songwriting.

Vocals are top notch, you can easily hear why Morgan chose this guy to replace Legion in 2003. He is capable of doing various types of voices: the traditional black metal high pitched screams, a mysterious and calmer storytelling narrative tone and as a singer he can sustain notes for several seconds, this kind of technique level is rare in extreme metal vocalists, he is truly gifted. There are some elements not featured in this demo that would latter appear in Funeral Mist’s sound and would have added more variety to the songs, like the mid paced polka influenced beats but overall the traditional european sense of melody -so important in black metal- is there in all its glory. Despite it's obvious flaws, this record is perfectly enjoyable.