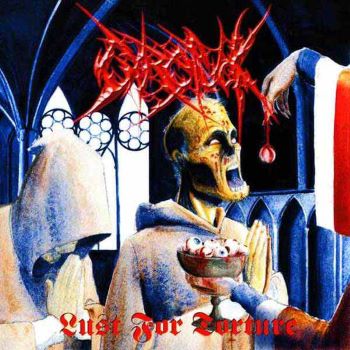 Great band name, it really lets you know what you can expect from this album, and it's not a loving tribute to the works of Bon Jovi or Europe, that's for sure.

After a gross sounding intro, the band comes out swinging with a collection of brutal death/grind songs that are simply intended to maim and mutilate. With all the subtlety of getting deflowered by a rabid mule, the band force feed the listener a hefty dose of down-tuned brutality in the best tradition of acts like Brodequin, Mortician and Devourment. Guttural death grunts fight it out with blast beats and up tempo polkas, while the down-tuned riffing holds it all together, even inserting the odd subtle guitar noodle here and there. In their execution, the band chooses the direct attack mode. Instead of focusing on technical niceties, they simply bludgeon the listener into submission with their caveman approach to death metal, with the songs kept short but brutal. Melodic subtleties are ignored throughout the album, but the band does build in slower parts in the form of stomping breaks, ensuring some necessary variation to prevent the listener from getting bored.

Musically this is right up my ally, but there are some things that are left to be desired, though. Take the unbalanced production, the percussion and the vocals are pretty up front in the mix, pushing the guitars to the background, making them difficult to discern in the faster parts. Still, this is one of those instances where the flawed production actually adds a bit of underground charm to the total package, and that goes for the small mistakes the band make here and there as well. Then there is the pretty unnecessary cover of Brutal Truth's 'Denial Of Existence', it really adds little to nothing, and is basically filler. And speaking of filler, the demo versions of 'Progression In Decay' and 'Sickening Surgery' are redundant as well. I know this is to pad out the album's runtime, but both tracks are present earlier on the album, so why put them on again at the end, sounding different and much weaker than the rest of the album?

This is a cool underground brutal death album, even if the production isn't all that. It won't win any new souls to the genre, but it still delivers a good dose of down tuned death/grind aggression. Only for the diehards!