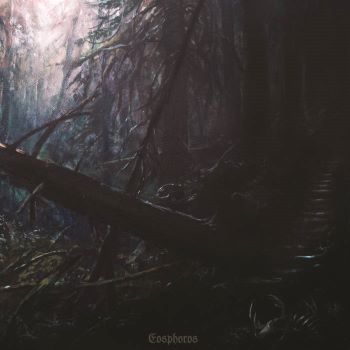 Black metal has always had its share of ups and downs in terms of trends and scenes. US black metal in particular being a case of being all over the place without a signature style, but in the case of Oregon outfit Eosphoros, that was an advantage that they took for their own benefit.

The eponymous record that Eosphoros dropped back in 2018 was one of the many albums overlooked and overshadowed that year, but that also gave them more mystique to naturally garner a following. With that being said I can safely say this is one hidden gem from the wellspring of black metal that Oregon seems to be turning into, and one of the best black metal records right now. Eosphoros' style of black metal is very interesting. They combine various elements but the two most important ones are sinister and at times depressing atmospheres and melodies, with harsh and thrashing melodies and riffs, and combined through a gritty production that's also oddly audible, not quite raw, but also not overly polished, which ends up completing the sound the band accomplished here.

The guitar and vocals of JG are the major stand outs. The tone is extremely sharp and aggressive, but in tracks like 'Dross', 'Trance Of Annihilation' and 'Sylvan Apotheosis', the cleaner and slower sections have as much sharpness and bite as the overwhelming riffs, and JG's howling shrieks complement the guitars perfectly. The same can be said of AD's bass work, his pulsing and thumping low end bass compliment the wailing guitars with an excellent sense of sonic depth, in fact, the bass boosts the effectiveness of both the faster riff driven sections, and the more atmospheric parts, as it adds a groove and flow that enhances the melodies. The absence of the bass in certain key sections also complements the sense of overwhelming dread the band carefully crafted in this record. AD also contributed with a mellotron in key sections of the songs, which is surprisingly effective due to the subtle force it displays when it appears, much like the bass does. The drums of MK are also worth praising, like his bandmates, he excels at seamlessly switching between fast and slow with blast beats and rhythmic fills respectively. Overall the performances of the band as a trio and the excellent compositions that showcase that pacing of fast and slow are the best part of the entire record, despite how lengthy the tracks are, the album never feels protracted or rushed, everything is as it should be, and at 45 minutes, the record is a compact and immersive experience.

The last thing I want to mention is the penultimate track 'Solitude', which is a 6 and a half minute long instrumental track that's pure forest ambiance, there's no actual instrumentation save for guitar feedback, and it serves as a break from the savagery that opened the record, as well as a preamble to the last track which encapsulates and bookends the entire experience. I mentioned that because it shows the unique approach Eosphoros has at face value nothing they do here is that original, veteran black metal listeners would pick up the influence of bands like Arckanum and early Ulver, but it’s the band's execution in their music by mixing and bending their influences and various other elements what makes the album so refreshing. Being unique isn't the same as being original, as its pretty much impossible to be wholly original, and Eosphoros prove how they created something truly special from tried-and-true paths, and that they're also a band worth keeping up with.