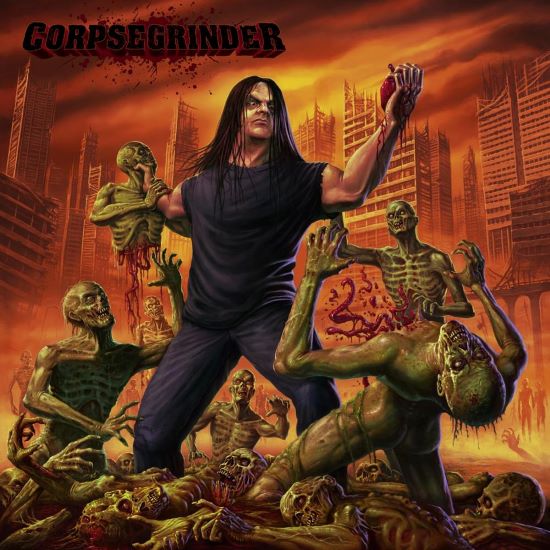 Corpsegrinder. That right there is a name immediately associated with death metal. Ever since the man joined Cannibal Corpse, replacing Chris Barnes, he has become known for his powerful and consistent vocals. Which, for a man who has been doing this for more than 30 years, is not a mean feat. This man was my inspiration as well, when I got in the realm of death metal, I wanted to sing like him. Those who have followed the carrer of Cannibal Corpse closely can bear testament to my words; the man is a fucking beast and deserves all the love and respect in his field. And if you happen to not be sated enough with Cannibal Corpse's latest offering, then fear not my friend, for he has answered your pleas!

Yes, Corpsegrinder has decided to put out a solo album that brings his voice into a more old-school sound, more reminiscent of the death metal of yore than the dissonant technicality that has come to characterize Cannibal Corpse's work since the man joined their ranks. And while the album never strays too far from a mid-paced rhythm, it still fucking crushes. Corpsegrinder as a whole is a great old-school-sounding record that takes a variety of elements from many OSDM bands from the past and throws it all in. The tracks have all some degree of variety so it never feels dull to listen to, and with none of the tracks being longer than 3-4 minutes, it's dosed well and no song overstays it's welcome.

The guitars and bass have a thick yet raw-ish approach while retaining some level of clarity, enough so as to enjoy the pummeling riffs constantly being thrown. The drums do sound like they're programmed but I could be mistaken. Nonetheless they are well mixed and rarely rely on blast-beats at 250 BPM, instead going for a more controlled pace. And regarding the man's voice, well... is there anything I can say that hasn't been said already? His vocals are as crisp and menacing as they were 30 years ago and age seems to not have affected his vocals at all, which is really commendable and speaks volumes of how much Mr. Fisher cares about his craft and his voice.

Overall, if you are a fan of Corpsegrinder's work (be it past or present) then you should totally get this. As I stated, do not expect this record to bear any similarity with his work in Cannibal Corpse, as it is less chaotic than his work there but brutal in it's own way. Corpsegrinder is a great record that shows once again why the old ways of death metal are so beloved, coupled with what can be easily considered the most powerful and consistent voice in death metal. Some moments might feel repetitive but it is worth the time nonetheless.