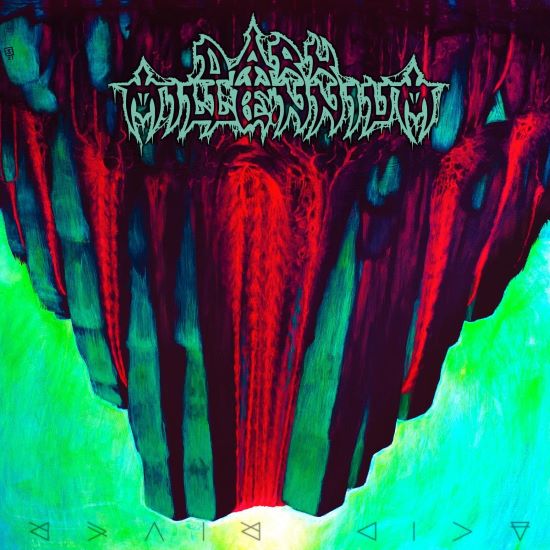 Since my first encounter with Dark Millennium back in 1992 I was absolutely flashed by this creative band. They never repeated themselves on their records and were always quite progressive and innovative in what they compose. Back in those days the German guys started as a death metal band (although there were already clear other influences on 'Ashore The Celestial Burden') and in 1993 they released Diana Read Peace which was a very irritating, controversial and wildly discussed album because of its progressive way. Nevertheless, I really like the musical approach they did on the album, and I still think that it is a great release which came maybe a little bit too early for the scene. After this release the quintet split-up for a long time and got re-united after almost 20 years. They've been releasing very good albums again for six years now and I would say that Acid River is the pinnacle of their musicianship so far.

First of all, the cover should get your attention – just turn it upside down and have a look at it then you will get the meaning of it (I needed the help of their vocalist Christian Mertens to get behind it). Then there is music. Album starts with the very impressive opener 'The Verger' and the somehow spaced acoustic intro and the following shouted words: “A long cold winter in our world begins” send a shiver and invite you on a very strange trip through of world of Dark Millennium. You can clearly hear the death metal influences in the arrangement of the track (here and there are some doom influences like old My Dying Bride or Paradise Lost also) but I wouldn't classify the music as real death metal. It is really difficult to say which style the band is playing. Maybe progressive avant-garde death doom?. You can find some sound arrangements that let you feel like you're on a trip quite often or like you're visiting Alice in Wonderland (okay, maybe that's the same trip). The atmosphere the band is creating is very gloomy and cold and I have to say that I never ever felt any happiness while listening to Dark Millennium. Neither on Acid River nor its predecessors. If I had to use a metaphor for the music it is just like a Death Eater sucking all your happiness out of your soul (if you know Harry Potter). By the way, if such a creature could talk, I guess it would sound like Christian Mertens. His vocal performance is absolutely awesome. The screams, whispers and the croaked spoken parts are great.

The production is very well done, like on all the other releases but what always comes forward is that the bass sound is a little bit missing. I would say that this is intentional to create this very cold atmosphere and to stress out the more acoustic sounds though. I have listened to the album for about 20 times now and I have to say that I always discover new facets that catch my attention in all of the tracks. May it be a tempo change like in 'Godforgotten', a great break in 'Threshold' or some interesting melodies elsewhere. This is definitely not an easy-listening album. It requires an intense listening without any interruptions and can't be listened to while doing something else. Because of this fact, I cannot mention a really outstanding track because they all are unique and all are really great work by Dark Millennium.

If you want a certain classification about the music, I would say that it is the missing link between the first two albums. Not a real step back but maybe a step sideways – a huge step. And the right step. I would also say that Acid River is a hot candidate to get into my 'best of' list in 2022.

Rating: 9.5 out of 10 smoking caterpillars