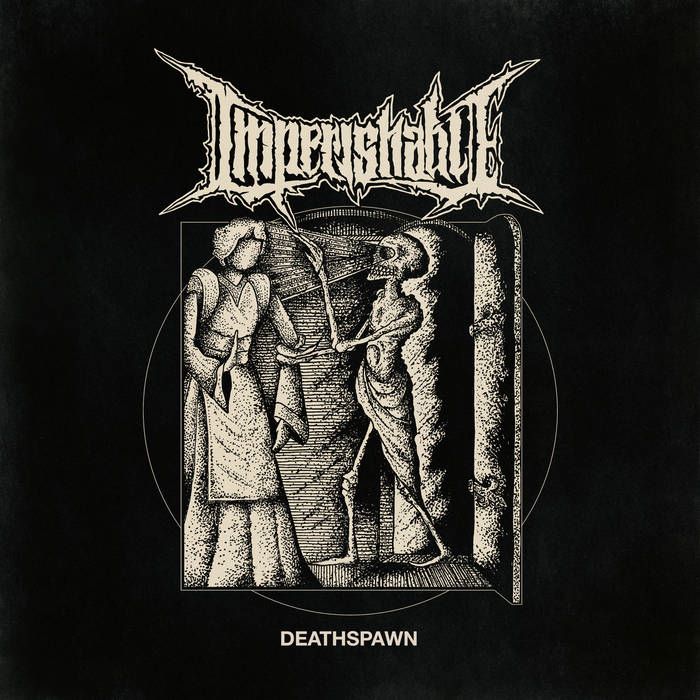 I have been a fan of the Stockholm scene of Swedish death metal for a while and I'm always excited about new releases presenting that style. I get excited about new LIK releases, same with Entrails and definitely enjoyed last year's releases from Abscession and Endseeker. Which proves this style has fans not only in Stockholm itself, but in other cities and countries as well.

And here it is - Imperishable from Göteborg, playing metal the way I like the most. Low-tuned guitars, mid to fast tempos, low growls, catchy melody lines and solos. This is a 3-piece band consisting of musicians which have been active on the scene for few years now, 2 of them being both "Condors" from Vampire (black/thrash/death band). First of all - the production of this release is quite raw, maybe even a bit too raw to my liking, but I can guess this is how it's supposed to sound. It's that raw kind of chuggy guitars and bass reminding of the first Entombed, Dismember or Edge Of Sanity albums. I usually prefer cleaner sound, but as soon as I heard those few riffs, sometimes accompanied by unexpected changes to drum tempos and solos, which I can't live without, I knew it was release for me.

Since it's a only 4-track release, lasting 14 and a half minutes, I might just go through all 4 tracks in detail. 'Teeth Of The Hydra' starts with a clip from "Jason and the Argonauts" movie from 1963, with King Aeëtes shouting "Destroy them! Kill! Kill! Kill! Kill them all!". Obviously, it's a death metal album, what else would you expect? And as soon as the drums and guitars enter you almost have a feeling you just discovered some sacred materials from ancient 1990s. But as soon as the track goes past the 2-minute mark, the interesting elements start showing up. Some melody lines played in the background, then harmonies reminding the best tracks of Dismember (around "Massive Killing Capacity"). 'Deathspawn' track is the shortest one here, bringing back the memories of Bloodbath albums, the early ones obviously. You can hear the recognizable style of melodies played on "Left Hand Path", with quite a few interesting changes of tempo. 'Fangs' starts off slow, reminding more of "Clandestine", but then more changes happen, with the main section during the verse reminding me of Mordicus "Dances From Left" album, which is a really nice touch. And it's not as if it was just a simple "copy and paste", it has so many different riffs and tempos that it's quite rich track with few flavours of death metal. 'Infernal Lust' brings back the "Left Hand Path" vibe at the beginning, joined by really good solos around 1:40, but generally it's got good blast beats, then slower tempo, Unleashed style, and ending on faster tempo again.

Inspired by classics, but varied release, to sum it up. Entombed, Dismember, Bloodbath, Firespawn, Mordicus with a hint of modern style. It has managed to get my interest and made me want more. I hope for a bit cleaner sound on the next release, but as long as it stays as varied as this EP I'm in.