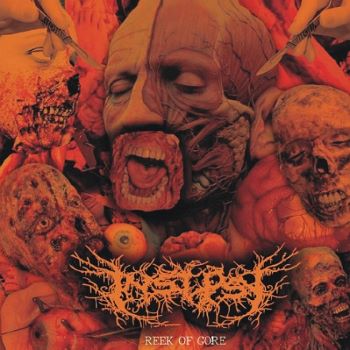 Brazil. In the 80's they gave us Sepultura, Holocausto and Sarcofago, later came Flesh Grinder and Rotting Flesh, and for those into soccer, there was also Ronaldo. I know fuck-all about soccer, and don't care about it either, so let me rejoice you with some words about my latest discovery from the country, some friendly men who go by the collective name of Insepsy.

Those of you who aren't blind and know how to read, will have already figured out that Insepsy deal in goregrind, albeit with a heavy death metal influence. From the pathological collage cover art to the song titles, you just know from the start what you're gonna get. And boy, do they deliver!

Musically it's exactly what you'd expect. Low tuned guitars, growling gutturals alternating with pitched vocals and raging percussion battle it out in a death/grind tornado that will leave you gasping for air amidst the violence, only loosening the accelerator for the occasional slower section. Insepsy are primarily influenced by the usual suspects of Regurgitate, Last Days Of Humanity and Dead Infection, but they have me also thinking of old Pungent Stench, Disastrous Murmur and especially Mortician at times. These last ones not only in the use of a drum machine, but also in parts of their song structures and some of the guitar work. These influences come together in tracks that seethe with aggression and fury, with blast beats and thrashy polkas aplenty. The riffing is lethal, sounds great and luckily the band does not overdo it with the groovy parts like a lot of their colleagues in the goregrind genre do. Sure, these parts pop up here and there, but the emphasis here lies more on metallic death/grind savagery than it does on groove. The songs all have a great deal of drive behind them, and there is some sick death metal guitar riffing to be found throughout. With the production being spot on, the aggressive music really comes bursting out of the speakers, delivering the punch that this music certainly needs. Also commendable is that they didn't fill up the album with movie samples, but that they'd let the excellent music do the talking.

The only lesser parts I found on here are the fact that the drum machine at times sounds a bit artificial, especially in the slower parts, but it isn't really a distraction here, I've heard far worse in the past. The other thing is that they overdid it a bit with the pitched vocals. These are minor gripes though, quickly forgotten by the furious delivery and awesome execution of the music. Bit of a shame it's all over after 26 minutes, I wouldn't have minded a song or two more.

This album is a savage offering of grinding death metal, and I'm sure this will satisfy fans of the bands mentioned above and death/ grind in general. This one comes highly recommended.