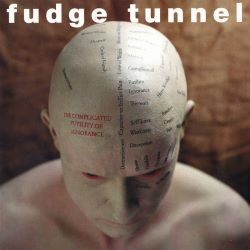 Fudge Tunnel was the band from that other guy from Max Cavalera's Nailbomb, at least for me it was in the 90's, but I have this feeling there must have been more people around who had the same idea. Just gotta be, right?

Not a metal band by any means, they still knew how to hit a nerve with their metallic approach to the old Amphetamine Reptile style, nailing just right 90's cynicism in their lyrics. They were long time viewed as the UK answer to Nirvana, which kinda makes sense a little on their earlier work, but really does sell the band short because they were way more aggressive and vitriolic musically, especially on this offering. Also they lacked, in true British fashion, a photogenic frontman to sell their image to a large audience. Musically they were a powerhouse, as evidenced on their final full length.

In style there are a lot of parallels to Steve Albini's Big Black, something that is clearly audible in Alex Newport's screamed vocal style and delivery as well as his sarcastic/cynical lyrics, David Riley's metallic plucking bass work and Adrian Parkin's driving percussion. These elements form the framework on which the band built their style further, injecting the feel of a more rough 'n' ready Helmet into the mix, but names of other alternative/noise acts such as Tad and Unsane also pop up. It's all being executed in a pummeling mid-tempo manner focusing on crushing groove instead of rabid velocity or melodic stylings, but the great grinding riffing, weird guitar noises and hook-filled songs manage to keep it all interesting throughout, even if it takes a few spins to discover everything that's going on here. The individual tracks are well thought out, because each one has its own characteristics to distinguish it from the others, without the album ending up sounding like a compilation album. The band take the foot of the accelerator completely in a track like 'Find Your Fortune', creating a Black Sabbath/early Swans/"My War" Black Flag crawling maelstrom of crushing heaviness, where in a track like 'Rudge With A G' the band augments their sound with some subtle 70's rock influences. The varied yet punishing heavy music is combined with a good production that neatly balances out the different instruments, putting the icing on this cake in great fashion. It's a cake made of cement, but who cares? It will last longer.

This album lands like a millstone on the cranium, showing that heavy music isn't constrained to the world of metal alone. It has some very memorable hooks and songs, and even if it may sound a bit rough to nowadays ears, this is still a piece of vitriolic heaviness sure to convince the more open-minded metalhead out there.