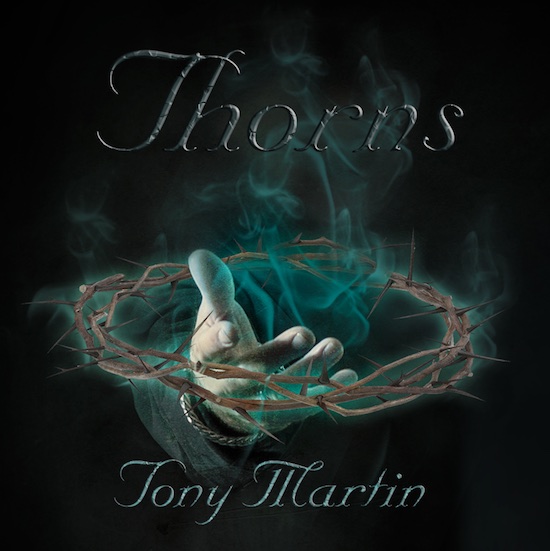 Type: Full-Length
Release Date: January 14th, 2022
Label: Battlegod Productions
Genre: Hard Rock, Heavy
1 As The World Burns
2 Black Widow Angel
3 Book Of Shadows
4 Crying Wolf
5 Damned By You
6 No Shame At All
7 Nowhere To Fly
8 Passion Killer
9 Run Like The Devil
10 This Is Your Damnation
11 Thorns
MetalBite on YouTube

Tony Martin definitely has kept his powder dry and is still on top of his game. The album starts with one high-pitched, fast-picked note in the guitar and some strong tom and bass drum hits: a declaration of war. This simple but effective balls to the wall intro is followed by a doomy riff with a double bass drum powered power-metalish beat. I wouldn’t say that second riff is directly a rip-off from Iommi’s work, but Black Sabbath’s influence is there, as it naturally occurs on any traditional heavy metal band with mid-paced riffing. I am not familiar with the other couple of albums he has released, but he used a complete band for Thorns and the quality of every instrument makes the whole album easy to hear and enjoy.

The first couple of songs have that early 90’s Sabbath vibe but the album in general isn’t that formulaic in terms of composition. Track no. 3, 'Book Of Shadows', reminds me a lot of Bruce Dickinson’s solo work. Chilling Gregorian chants and clean guitar arpeggios make a perfect mattress for Tony’s voice to scream his lungs out, reaching really high notes and playing with a very extended range. There’s a keyboard solo at the end of the song that I really dig. The rest of the album features a couple of power ballads with acoustic guitars too, but overall, he sticks to the heavy doom metal riffing formula with some progressive twists like the keyboard undertones.

That classic hard-rocking vibe, done with modern production techniques by the generation that started it all is so pleasant to hear. That guitar hero soloing is not so common on modern guitarists and the same can be told about Tony’s educated and powerful vocals. The bassist uses a nice metallic tone, slightly distorted and probably using a pick, he perfectly understands his role as a company for the guitars but plays some witty lines apart from them here and there. The drummer is a fucking beast by traditional heavy metal standards, even if the songs aren’t that fast he dominates the double bass drum technique and his cymbal work is methodic but extremely elegant at the same time. Even if it’s kind of early to call, I think this record is a strong contender for the album of the year title. At least on its genre it would be one of the best, that’s for sure.

It took 17 long years for Tony Martin to release his follow-up solo album to Scream. I have to say that I was pretty surprised to read that he did release Thorns because (at least for me) it came out of nowhere. Besides Tony members of the band are Greg Smith (ex-Alice Cooper, ex-Rainbow) on the bass, Magnus Rosen (Hammerfall) also playing bass, Danny Needham (Venom) on drums and Scott McClellan - guitars. Quite a bunch of high-quality musicians, I would say. So, what do they deliver for us on Thorns?

First of all, I would state that the spirit of Black Sabbath is always a little bit up in the air while you are listening to this release. I mean, of course this is no wonder because probably most of you know that Tony Martin released some great albums with Black Sabbath. What I also have to say is that he hasn't lost any of his power in his voice after all these years. He still sounds as powerful as he was like in the late 80s / early 90s and he's 64 years old. Chapeau!!

Thorns starts with a nice stomper called 'As The World Burns'. Mostly mid-paced tempo riffing and drums, stunning breaks and a great range of Tony's vocals make this track a great opener for the album. 'Black Widow Angel' could have been easily written by Black Sabbath too. Doomy, creeping guitars combined with galloping drums which sound very powerful. The bass part in the middle of the track is quite nice especially and underlines the dark atmosphere of the song. The album is really very varied and combines doomy pieces with much more epic tracks.

Nevertheless, there are few little bit weaker tracks on the album, too. 'Passion Killer' is one of the songs I don't like too much. I guess it's more modern metal feeling that this song spreads but it is not much my cup of tea. 'This Is Your Damnation' is an acoustic track which is quite irritating too. Not bad but not quite what I expected on this album. But all in all, the sum of the great tracks prevails on Thorns. 'Book Of Shadows' is one of my absolute favorites here. It starts with a choral singing and turns into a real killer of a melodic and epic track where also string instruments are used. It spreads a very majestic atmosphere and one can notice that Tony has lost none of his vocal skills in all these years. Here again you can feel the spirit of good old Sabbath – "The Eternal Idol" or "Headless Cross" come to my mind again. 'No Shame' is another Black Sabbath-like track. Just listen to the guitar riffs. What makes it unique though is Tony's very melodic vocal line so you cannot really say it's a sheer Black Sabbath rip-off. 'Crying Wolf' is another track worth mentioning because it has a very interesting melody. It starts quite unspectacular but turns into a nice track that spreads some warm and relaxing Mediterranean atmosphere through those Flamenco-like melodies.

If you want to listen to a really good metal album (difficult to classify it more in my opinion, not really doom, not really heavy metal…) you must check out Thorns. If you like the Tony Martin solo albums and his releases with Black Sabbath (okay, forget “Forbidden” please!) this is quite essential for you too. I think it is a very strong comeback album and I hope that it will not be that last one by Tony Martin.