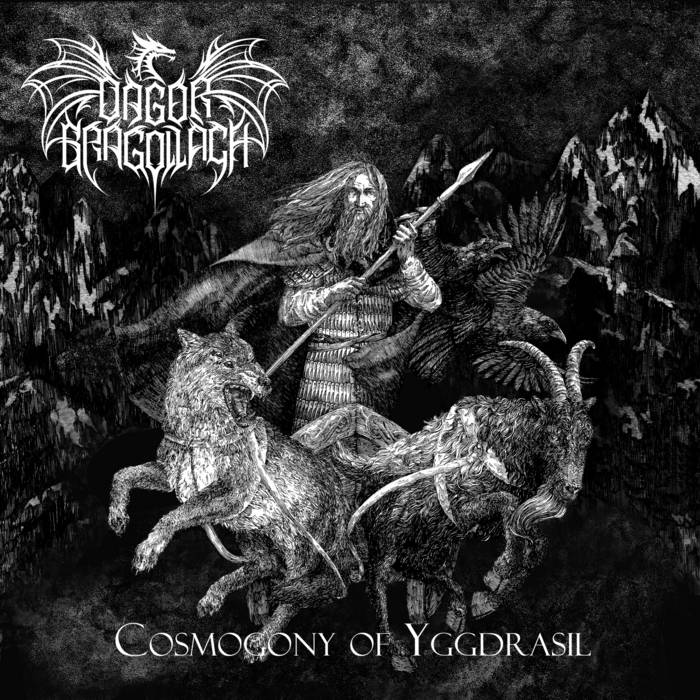 The next review is written by a guy who has absolutely little knowledge of what black metal is. Of course, I have my favorite albums but, other than Burzum's metal discography, they can be counted with one of my hands. Also, sadly, I'll have to resort to comparison, something that I HATE to do, but this time I have not much options so... here goes nothing!

Cosmogony Of Yggdrasil is an album that I listened to several times so i can talk about it, and not because I couldn't talk about it properly since the first time, but because I really enjoyed most of the music presented here. Most of the songs are fast, unstoppable and have an aura of chaos and evilness, proper of this music genre. Not only that, but also, they have their own structure that, little by little, hooks the listener owing to much of their sections, and that talks a lot about how rich this album is in terms of composition. The voice is grim and complements the music pretty well. In addition, I liked a lot the addition of guitar solos (which, nay, serve as licks and arrangements) in the middle of the songs, as each one of them has its particular lick that makes them memorable by themselves. Although the album in itself is pretty enjoyable and effective as a whole (in its majority, I have to emphasize once again), many of these songs are perfect to be added to your black metal playlist individually due to their individual merits and virtues (the solos, riffs, atmosphere or song progression).

Everything OK up to there. HOWEVER, I have come across some problems with this album that impeded me to give it a higher rate.

As I mentioned before, most of the music is intense and fast, but there are some other occasions in which the album takes a more mid-paced approach that ruins the experience due to the contrast with the rest of the album. The track 'Raunen' is the perfect example of this. It is the worst song of the album in my opinion due that it is longer that most of the good tracks that the album has, and it has a strange rhythm that, according to me, tries to be progressive, but that simply fails in being interesting. It really feels tedious and every time I listened to the album afterwards, I skipped that song due to how irrelevant it is for the rest of the oeuvre. Something similar happens with the last songs of the album. Half of 'Nobody Needs This World' and 'Yggdrasil' are not totally bad. Ok, they are actually not bad tracks, but the aggressiveness drop is notorious, and it has to be mentioned. It feels like a tepid ending for an album that started such in a grandiloquent way.

To conclude, I think that the band still lacks some personality to be something really outstanding. The band's voice and musical style kind of reminded me of what a band like Immortal could do (but with solos in the middle of the songs). This commentary may be seen as harsh since this is the band's very first release and I'm complaining about actually nothing, but it's something I wanted to mention in order for the band to take it into account when writing new stuff in a future. Despite this, I'm pretty sure that they can improve with the pace of time and may write more authentic music and with more identity.

In summary, Cosmogony Of Yggdrasil has outstanding songs within its repertoire and, as a whole, might be pretty attractive for black metal fans. It is NOT a masterpiece, and, for me, the band still has to look for their own personality. It is a good beginning, though, a worthy debut indeed. Recommended for those who seek a more melodic black metal, but with that darkness that characterizes this genre.