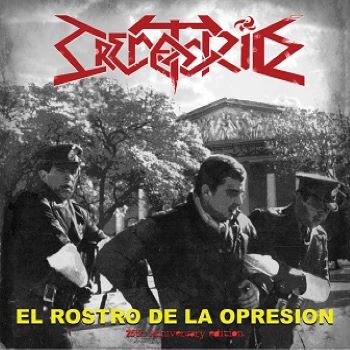 1995 was a hell of a year for Argentina. Carlos Menem -a right-wing idol, traitor and thief- was reelected as president, consolidating the longest continuous leadership of the State… and his neoliberal regime of corruption. Crematorio’s first album The Face Of Oppression, released that year, mostly deals with social denounce topics and it's not for the less; considering inflation, unemployment and external debt rates that year. They play mid-paced groovy death/grind, strongly influenced by mid-90’s Napalm Death indeed. The drum kit sounds more punk than metal at times but the inclusion of solid blast beats and fast sections in general do the trick perfectly.

Drumming is tight and precise, showing some reminiscences of "World Downfall". I’d say there’s more of that on some d-beat riffs too, that sound a little bit more like Terrorizer than ND. The first track begins even slower, like "Multinational Corporations", "Evolved As One" or even Godflesh stuff, that kind of feel; they certainly did their theoretic homework while writing this material. The bass guitar is heavily distorted and doesn’t really go beyond the guitar lines but functions adequately as an anchor between the rhythmic and the melodic layers of music.

The guitar tone is raw amp distortion as you can imagine. The production of the album overall is very crude but lets you hear the band’s performance and clean execution. You could say the vocals are the most awkward element of the album, especially the high-pitched screams that sound out of place but the verses sung in classical growls are completely fine. The album was recorded in 1994 but it was re-released by Careless Records in 2019, the hard work behind this label and their efforts to bring back to life lost gems like this is notable. Cheers!