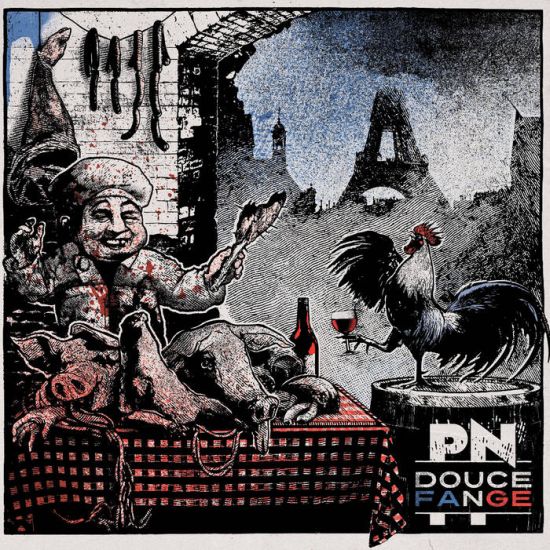 France is a fascinating country when it comes to art and music, and in regard to metal music it's also all over the place, especially in black metal be it the occult and depressing sonic legacy of the Black Legions, the unsavory and controversial fringe side, and even the dissonant Avant-Garde side popularized by Deathspell Omega and Antaeus. Which brings me to Pensées Nocturnes, a Parisian act that’s even more fascinating than the previously mentioned acts. This band has been an oddball since their debut record, but with each album they seem to get weirder and weirder, both in music and presentation, and this continues to be the case with their newest opus Douce Fange, released by Les Acteurs de l'Ombre Productions.

Pensées Nocturnes, is as mentioned, an oddball musical project. The band is classified as neoclassical Avant-Garde black metal, and they certainly get very experimental and outlandish with their music, but this doesn’t show through a dissonant and complex songs, rather, this is a melting pot of all forms of classic French music, filtered through black metal and with a flair for the flamboyant. In many areas the band is playing carnival and cabaret music with some jazzy and bluesy tinges here and there, which include, baritone opera like singing, gang choirs that would feel at home at some pub, the inclusion of accordions, organs, trumpets, cellos, a saxophone, and any other instrument you can think of when you hear words like carnival music and a cabaret. While the music is very eccentric and varied throughout, one element that’s noticeable is how melancholic and even somber the actual atmosphere is despite how colorful the instrumentation is, and this is also displayed through the vocals. PN mastermind Léon Harcore’s vocal range impressively switches between harsh growls, dry and unhinged shouted vocals and deep baritone opera singing. The overall execution and the meshing of such extravagant instrumentation with what often borders on depressive black metal give the entire album an unhinged quality, which is present in every single song, and more impressively, none of the songs play the same, each is a unique experience while being uniform in the instrumentation. If you’re into straightforward black metal then this record will sound like a mess, because at no point do the songs do not include folkloric passages, samples of TV programming, accordions or organs. The overall experience gives the vibe of the urban nightlife of Paris, in all its deranged and flamboyant splendor. And at under 50 minutes, the album is a robust sit through that doesn’t overstay its welcome, nor does it rush to get to the good parts. At first glance this record does sound like pure madness, for better or worse, but what’s impressive here and what can’t be denied is the technical talent of the band, which given how massive this album is, they needed to be talented musicians, and that’s certainly the case, the guitars, bass, drums, keyboards and assorted French instruments are played with such precision and prowess that it serves as the perfect foil to the musical chaos, and if I’m allowed to blabber about philosophy, feels like what good ol’ Fred Nietczhe described as the Apollonian and Dionysian artists, those being the logical, ordered and disciplined, and the instinctual, chaotic and emotional respectively, and that’s this record in a nutshell, it's a wild yet incredibly complex experience, a perfect manifestation of chaos through order. It also makes it hard to single out individual performances because this music and technical prowess could only be achieved by the collective of artists Léon Harcore amassed playing as a unit, and if I signal Harcore is because he’s essentially the ringmaster of this demented circus.

Overall, Pensées Nocturnes continue to deliver a frenzied and somewhat melancholic experience that’s unlike anything else, mainly because of how unapologetically French the music and presentation is. The only major flaw here is really how wild it all is, black metal purists will probably hate how over-the-top this record and band is, fans of experimental music will take issue with the black metal parts of the record, and normies will most definitely be intimidated by the circus organs and accordions playing next double bass drums, tremolo picking and a madman bellowing and growling. But to those bold and twisted enough, willing to take the plunge, this one’s worth recommending.