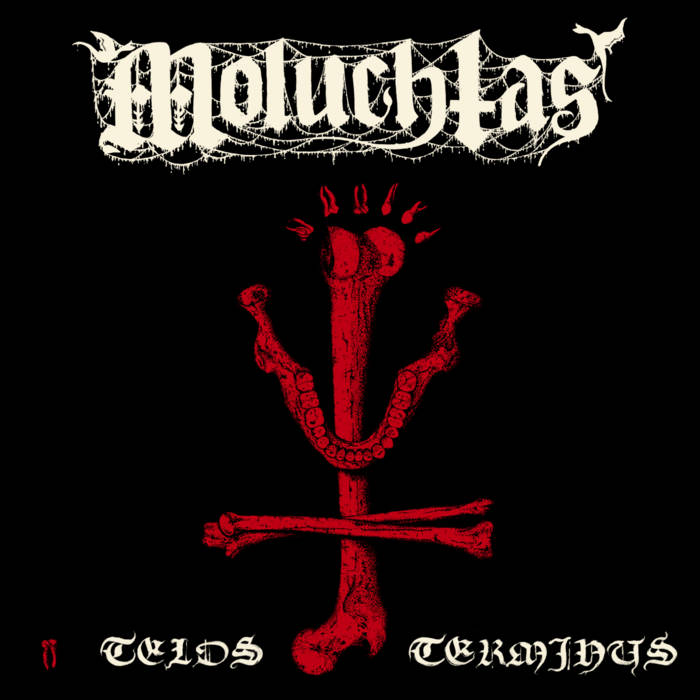 Buy on: Bandcamp
Type: Compilation
Release Date: February 11th, 2022
Label: Godz Ov War Productions
Genre: Black, Death
1 Surrender To The Void
2 The One That Defiles The Earth
3 The Awakening
4 A Carnal Illumination
5 Damnation's Drawning
6 The Sanguinary Provenance
7 The Quintessence Of Emptiness
8 The Sun Of Malediction

Blackened death metal has been a genre that every so often starts trending in the underground, be it in war metal form, or the hellish and putrid variety, but regardless, it’s a fairly ever evolving hybrid genre since there’s no real blueprint beyond the pioneering bands. And so, enters Moluchtas, a Belgian solo act and their album, or rather compilation, Telos Terminus, appropriately released by Godz Ov War Productions.

Due to this record being a compilation of previously released material there’s really not much to say if you’re already familiar with this project, however, this is the first time I come across this project so having the material neatly packed in an accessible way is a plus on my end. As for the music itself, I mentioned how this is a solo project, but at first listen you wouldn’t tell it’s the case, while it is possible there’s a session lineup behind it that is currently unknown. In regards to the music itself this is an interesting display of blackened death, as there is a perfect blend of atmosphere, technicality and sheer darkness. The riffs seamlessly switch between fast blackened sections to slower more death metal laden passages all the while featuring a deeply dark and disturbing ritualistic atmosphere that both builds momentum and enhances the overall experience.

The only major flaw I can point out is the fact that it's a compilation, as there’s a very clear and blatant split between the first half and the second half, which is of course, two EPs packaged together. While the style and performance is consistent between both EPs, the first half of the album is very fast, very intense and to the point, while the second half is much more technical, atmospheric and even experimental. The songs are very long and have several monotonous dirge-like passages, as such the overall experience is disjointed at the middle since both EPs had very distinct and clear directions that aren’t compatible with each other. That being said, I do have to praise Moluchtas, because the two releases that comprise this compilation perfectly showcase what's unique about this project in the sea of Blasphemy and Behemoth clones and gives a picture as to what this project's full length could be.

Overall, this compilation is a very convenient way to experience this new project and is a good first impression of the strengths as well as a relatively fresh approach to black death metal.

Best tracks: 'The One That Defiles The Earth', 'The Awakening', 'The Sanguinary Provenance'