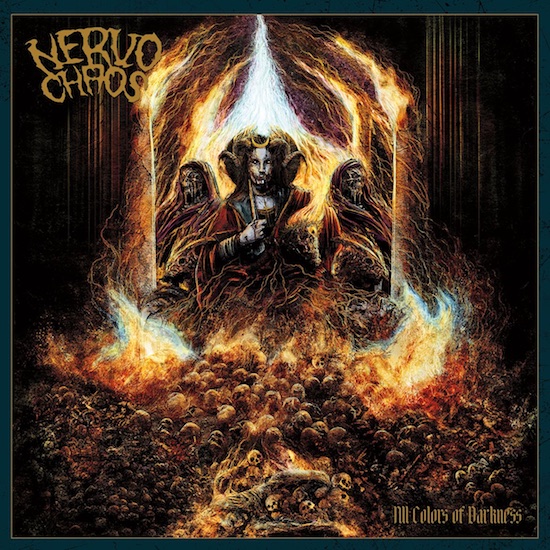 25 years is a long time period, even more so when you share such time gap with fellow band members. One such case is Brazil's NervoChaos, who've recently had their 25th anniversary. Being one of the oldest running acts from Brazil and South America and having 9 albums in their career, you'd think that they would've stopped by either some power struggle within the band or a conglomerate of circumstances that reach their boiling point. But no, not only are they still active and fueled with power, but also will spawn a new offering for the whole world to behold. And what an interesting spawn it is...

The album wastes no time in throwing everything at you; fast tremolo-picked riffs, pummeling drums, heavy bass and raging vocals are all spew at once as soon as you play the record. The band's style can be described as death metal at its core with a wide abundance of influences, most prominently classic thrash metal. Brutal, fast and yet it is quite catchy, with a wide abundance of interesting riffs and melodies to be found here. Drums in particular rely more on the old-school death metal drumming rather than the excessive use of blast-beats, which are used in tasteful doses only when necessary. The bass' presence is actually more prominent, its weight, present and listenable, adds that whole punch that is needed for this kind of style (one known for drowning the bass in the mix). Vocals in particular are not exceptional but still consistently delivered with full passion and fury throughout the entire album.

The pace of the record is pretty much the same for almost the entirety of it. There are no abrupt changes to catch you by surprise, yet it keeps the pace and intensity going without interruption... until the last tracks. They were the most unexpected surprise from the album. Why a surprise? Well, they're covers from The Misfits and Hank 3, and the latter sounds more like something that Korpiklaani would do. And still, even with such an abrupt change, I enjoyed it thoroughly. It is quite the pace-breaker, and it may not be something that a lot of people may enjoy (at first at least), but this little move shows that the band is willing to go above and beyond the standards of the genre and is a bold move that has my respect.

Overall, if you crave some catchy death/thrash, then this album will be for you. For a band with such a long career, they have clearly stated that there's no desire to ever stop and that they will do as they please in the genre, as long as they have fun and enjoy the final product. The album may seem a bit repetitive at moments, but nonetheless is quite enjoyable and totally recommended.

Many metalheads do well in recognizing how South America has impacted extreme metal since the 80’s, be it the development and continued enforcement of black and death metal or the still fertile thrash scene. On February 11th, 2022 one of the stalwart flag bearers of Brazilian death metal comes back. Nervochaos. Their tenth studio album is called All Colors Of Darkness, and it will be released by Emanzipation Productions.

Nervochaos are one of the major and most prolific death metal bands out of Brazil, and one of the most reliable. For over two decades the band has had a steady career and a consistent output of quality death metal that carry the signature Brazilian mark of quality. In Nervochaos’ case, the band’s style of death metal leans on the extreme speed that’s clearly inspired by early Teutonic thrash metal, as well as the serendipitous influence of Sepultura and Sarcofago, but with each passing album, the band continually modernizes their sound bit by bit, and on All Colors Of Darkness, this continues to be the case. The band’s blistering speed and thick and heavy guitar and bass tone are as “BRVTAL” as ever, but what’s impressive is how the band’s ability to not only be heavy and extreme, but also have some surprising technical proficiency. It's not just riffs and blast beats, the band seamless switches between punkish d-beats and mid paced sections, that being said, they never let up with the speed or the intensity, and it's impressive how the band has enough technicality and dynamics without crossing into progressive territories. In the end this album uses various elements to make the most distilled and perfected form of death metal, no filler, all killer in many ways.

However, while this album does deliver in every way you want death metal to do, it has two major shortcomings that I have to point out. The first one is the homogenous nature of death metal as a whole. Nervochaos are a seasoned act and manage to counter the one note aspect of death metal well enough by being really good in their style, but they’re not completely immune to it either. At best, this record is everything a death metal record should be and how it should sound, but on the opposite end, that’s all it really is. It's too extreme and intense for newbies and the flurries of punk and thrash make it even more unapproachable, but the initiated will certainly get their kick. The second shortcoming is precisely the fact I can’t highlight specific tracks as the best because it all blends together in some areas.

Overall, it's still a good death metal record, and Nervochaos do have their own spin which makes them stand out, so the best description I can give is comparing them to Motorhead or AC/DC. They’re reliable, steadfast and consistent, while not revolutionary. That’s not a deal breaker and that’s enough for a recommendation.

Nervochaos want you to know that life below the poverty line in Brazil is bleak, and like many bands before them, they choose to use the time-honored form of death metal as a vessel in which to pour their ire and frustration with the deceit and corruption that so afflicts the political and economic systems that continue to oppress much of their society. Nervochaos style themselves as ‘brutal’ purveyors of their chosen sub-genre, but in truth, in comparison to the utter sonic devastation of classic Suffocation or Cryptopsy, this is not really the case.

Instead, Nervochaos offer an energised and almost ragged take on mid-period Deicide, or any-period Vader, with clear influences from the heavier end of the hardcore spectrum, not least on the raging ‘Demonomania’, which is practically Discharge worship, although one can discern shades of Agnostic Front, Strife and even Earth Crisis throughout an intense and exhausting album. Their South American heritage also shines through periodically, particularly during the many sections which pummel the low-E string, relying on a rhythmic, rather than sonic heaviness, that cannot help but conjure memories of the glory days of Sepultura. All Colors Of Darkness is considerably faster, uglier and more technical than that band’s "Chaos A.D.", but it induces the same feeling of urban lawlessness and undirected fury and indignation that made that album such a startling record.

For all of the undoubted passion that Nervochaos deliver their songs with though, it is undoubtedly generic at times, and would be improved were Nervochaos to introduce a little more variety into what is a somewhat one-dimensional sound. However, the fury and conviction with which they play cannot be faked, and it would be churlish to deny that this is anything other than a solid death metal record.