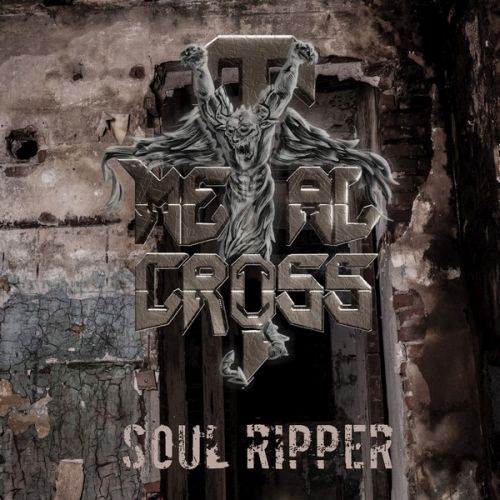 One of the most enjoyable aspects of metal’s enduring obsession with the cult and obscure is the periodic excavation of long-forgotten bands, whose careers failed to ignite for one reason or another, but who, emboldened by renewed interest, are able to restart their stalled journey, and complete unfinished business. At the most successful end of the spectrum are bands such as Hell, Atheist and Cirith Ungol, but even for bands not quite on that level, it can still be a highly rewarding endeavor, satisfying those who remember the band from the first-time round, as well as introducing them to a new and younger audience.

Metal Cross are such a band, a contemporary of the also-revived Artillery in the Danish scene of the 1980s, thawed from their state of cryonic stasis in the mid-2010s by a re-release of their original demos, which spawned a live return, and ultimately this, their debut full-length, Soul Ripper. So, was it all worth it? The answer is an emphatic yes – Soul Ripper is a polished and mature album, modern enough to attract attention in 2022, but all the while retaining a classic metal feel that connects the band to their heritage. Despite their history as touring partners of Artillery, they are not as thrashy as their compatriots, and despite some speed metal touches which are occasionally redolent of Helloween or Iron Angel, Metal Cross’s music general sits in the sort of space occupied by Annihilator or the current iteration of Accept. This is satisfyingly chunky riff-led metal, generally played at a driving mid-tempo, adorned by clean, melodic vocals. There is more than a hint of Hetfield’s post-black album gruffness in the voice of front man John Lybaek’s melodies, but when he is joined by the classy harmonies as he is on many of the choruses, Metal Cross even approach Alice In Chains territory, albeit without the creeping sense of dread that Layne Staley and Jerry Cantrell’s eerie intervals evoke.

Metal Cross may never achieve the success that they might have envisioned in 1985, but if that door closed when they originally parted ways, the excellent and exuberant Soul Ripper opens a window through which the band should see a bright future.