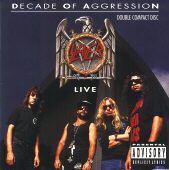 Slayer is my favorite thrash metal band. Even if the genre was already coined, it wasn't until the Haunting The Chapel EP that things started going extreme in terms of high-speed tempos and the dissonant sense of melody. Pioneers putting the devil in music. This live album represents the end of the band's golden age that started with that EP. It was recorded shortly after the release of their last “classic” album and features the original line-up with Jeff on guitars and Dave Lombardo on drums.

Lombardo’s revolutionary Latino influence in thrash metal percussion is captured in all its glory, double bass drums sound absolutely pummeling as well as the intrinsic tum breaks. Tom's voice sounds strained naturally, screaming your guts out every night on tour isn't particularly good for vocal cords but his potency is intact and his attitude undisputed. Bass guitar is present on the mix, like it was in studio offerings before Reign In Blood where they turned its volume down considerably. When the guitars change leads, the bass fills the gap that rhythm guitar leaves. A crunchy low end is always pleasing in extreme metal. The guitars’ tone is sharp, acid, not that thick but has enough body to add the desired weight to the riffs and of course its distortion is completely raw and analog. Soloing is accurate and memorable, just like the studio takes. Contrary to Rick Rubin’s super dry trademark studio sound, this mix sounds very organic and the acoustic dynamics from the venue give a delicious, natural, immense reverberation.

The setlist consist of a compilation of the band's first six releases, balanced this way: 3 songs from the debut album Show No Mercy, 2 from Haunting The Chapel, the song 'Hell Awaits', plus the good half from Reign In Blood -Jeff’s songs- 2 songs from South Of Heaven and 7 songs from Seasons In The Abyss, the album they were touring for. This setlist is pretty much what they continued playing live for the rest of their carrier, just a couple of songs from the last album at the moment of the recording feel like fillers in here ('Expendable Youth' and 'Spirit In Black') the rest are all classics. Regarding the production quality, you can't hear a lot of crowd noise but the acoustics from an open-air festival definitely characterizes the mix a lot. The performance of the band is astonishingly solid, there are normal little errors but that just shows it wasn't edited much. What you can hear is exactly how the gig sounded that day, no studio overdubs.

Now that Jeff is dead and Lombardo left the band on bad terms, this album takes relevance as the only opportunity to hear such an extensive setlist live by the original line-up, the other options are the live tracks from Soundtrack Of The Apocalypse and Live Undead, none of them full shows. I'm taking 2 points away because of the song selection -the couple of fillers- and 1 point because the final master could have been slightly better, for a solid 9.7. This is the best live album from the most important band of thrash metal.