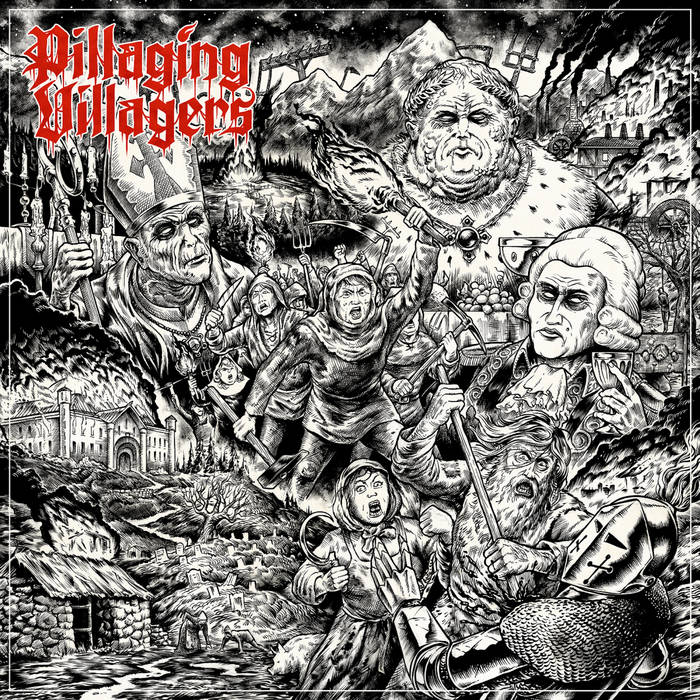 Buy on: Bandcamp
Type: Full-Length
Release Date: March 11th, 2022
Label: Independent
Genre: Crossover, Thrash
1 Wretched Of The Earth
2 We Remember
3 The Count
4 The Bishop
5 The Emperor
6 The Crisis
7 Voices In The Sky
8 Burn The Monastery
9 Smash The Factory
10 Ready To Die
11 Crush The Enemy
12 Freedom Is Ours

I woke up one morning with an email, from a guy I don’t know, asking me to review his album. Turns out it was from a certain Dave Frazer, vocalist, instrumentalist and composer of Pillaging Villagers. I promptly downloaded his album and started listening. Metal-Archives described the music as crossover thrash with folk/punk influence, so it looked interesting, but it did not fully prepare me for the fun I was about to have. I would describe the main sound of this album as folk metal, but with a strong crossover thrash component. This means shorter songs, fast paced drumming and fast palm muted riffs but with many sing along chorus and upbeat melodies. This perfect and quite unique blend results in 40 minutes of pure, unadulterated, folk metal fun! If you couldn’t already tell (by the fact I used the word fun two times already), I think this album is just a blast from start to finish. But it’s not just that, it’s a seriously well composed and musically rich work.

The album is comprised of 12 songs on the shorter side, between two and three minutes, except for the 6th song, 'The Crisis', which is a whopping 8 and a half minutes but more on that later. So, it all starts with 'Wretched Of The Earth', a song with an upbeat thrashy melody that is guaranteed to pump you up. It then goes to the chorus, which is pure folk metal, complete with chanting gang vocals and a nice bagpipe or keyboard melody accompanied by strong guitar leads. 'The Count' uses a traditional folk melody that I swear I already heard somewhere, but I cannot for the life of me remember where! Anyway, this song as a bit more of a darker, almost gothic vibe with the gloomy keyboards. Overall, it’s still catchy despite being a bit darker. The crisis starts with a slower paced melody and gets progressively faster. Being the longest song, it truly has the time to build up and create an atmosphere. It features the best solo of the album and even has a short but crushing breakdown mixed in. I don’t know if he plays his own drums, I think they might be programmed. They are not the star of the album but still work well with the whole album overall. Essentially, all the riffs and melodies are catchy on this album; even in darker themed songs, you’ll have the inexplicable urge to take your pitched fork and tear down the ruling class! Vocally, he has a traditional, folk metal, scream/growl à la Ensiferum (I swear, sometimes, it’s like I hear Jari Mäenpää singing) but with a lot of clean, sign along, chanting choruses. It’s safe to say Dave Frazer is a pretty great musician, he’s technical when he needs to be (there is some nice guitar work and impressive solos but nothing over the top). Everything still has a punky DIY vibe.

I did not read the lyrics, but with song names like 'Burn The Monastery', 'Smash The Factory' and with the fact that this was written on his bandcamp page: Unite against the right, with pitchforks high and voices to the sky! #antifa, it looks like Dave Frazer is a fellow leftist, which made me love the music even more! Another impressive thing is the production. I think it’s one of the best sounding, independent releases I ever heard. You can clearly hear every instrument.

So, to conclude, this is a great folk metal album from start to finish. It’s musically solid with such catchy riffs, awesome folk melodies and many earworm choruses. It’s a perfect blend of pure folk metal and crossover thrash making it stand out from other folk metal. Do not skip on this album if you like folk metal, thrash metal or politically infused metal.