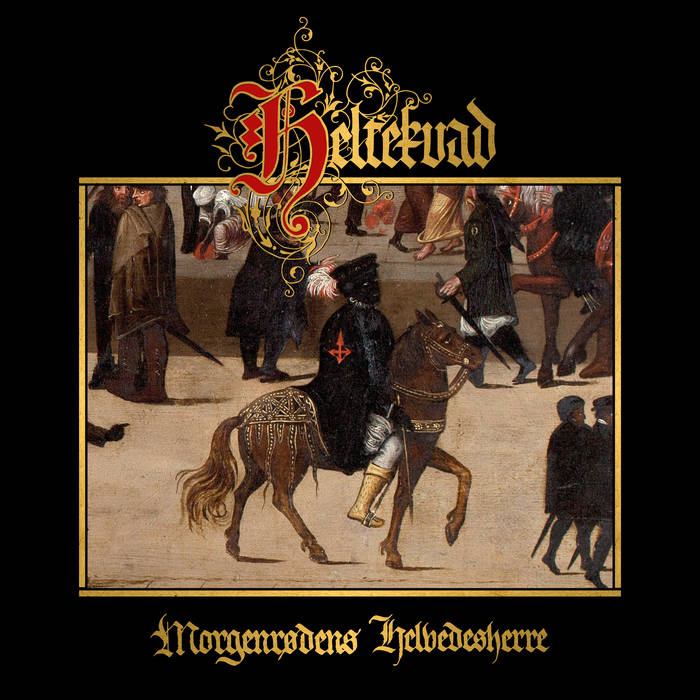 Danish extreme metal has been having something of a surge lately, be it the putrid and occult death metal or the somber atmospheric black metal camp, the Danish are proving they aren’t slouches when it comes to metal, and on the latter category we now have Heltekvad, a medieval black metal act composed by members from Sunken, Afsky and Morild, and their debut full length Morgenrødens Helvedesherre, released by Eisenwald.

Heltekvad, are as I mentioned, a “medieval” black metal band, while not exactly a subgenre per se, it’s definitely more of a trend and style that has been around in black metal for a while. Without getting into history or semantics, the basics involve lyrical and conceptual content that’s based around medieval ages, naturally, but more specifically in regards to music, this style tends to be very melodic and vibrant, more so when bands bring folkloric instrumentation, and that certainly applies to Heltekvad’s music and it's the first thing people will notice. The music from the get go is very melodic, very energetic, and somewhat unhinged, but there’s also an extremely melancholic and despondent atmosphere. The melodious riffs and agonizing vocals sell this, furthermore, while the band do make use of medieval folk instrumentation to enhance the music. The album isn’t some danceable and jolly good time, nor does it sound epic and grandiose, though given how the people involved are also in Sunken and Afsky, it's no surprise how this album despite how lush and energetic the music and performances are, can still sound like utter despair and agony. In terms of instrumentation each member contributes a sizable portion, which is good actually, since there’s an organic chemistry and sense of unity in the band. Afsky main man Ole Pedersen Luk and Sunken co-founder Simon Skotte Krogh handle all the strings, and the end result are unhinged but expertly performed riffs, melodies, and bass lines.

The guitar work is surprisingly varied and dynamic, the way the guitars lead the music alongside the vocals is damn impressive, and on top of that, while at first listen it might sound like aimless tremolo picking, there’s an actual method. The way Pedersen and Skotte play their guitars and bass sounds as if the band added distortion to lutes and fiddles, its fast riffing but at the same time the speed and aggression never overwrites the melodies, and when the band slow down to more mid paced songs, the guitars serve as a forlorn wall of sound. The bass, also shared by Pederse and Skotte, is excellent, while not as prominent as the guitars, it's still very much present and it serves as the foundation and counter to the melodies, while adding a layer of dimension to enhance the already powering guitars. The drumming and additional vocal work of Simon Frenning Sørensen is also worth praising, in fact, the drumming is the best part of the record, as Frenning displays skill, finesse and strength. He doesn’t just blast beat away, though there certainly is plenty of it. The most impactful moments are the slower sections when the drumming turns into pounding, all in all excellent work.

Which brings me to the vocals. Pedersen had already displayed his manic howls in Afsky and they suited that band perfectly, but what’s impressive is how while it is the same vocalist and the style is similar, the feel and presentation is completely different as the vocals perfectly match the music displayed here, and it's a testament to Pedersen’s skills, since his using the same voice for a completely different approach and it works just as well.

Overall Heltekvad with their debut managed to impress and show that the whole style of medieval black metal isn’t just musical LARPing as there is a genuine focus and passion for not just the aesthetic of the “ye olde times”, but the music and sounds of that time, and Helktevad were able to give it a uniquely somber and melancholic spin.