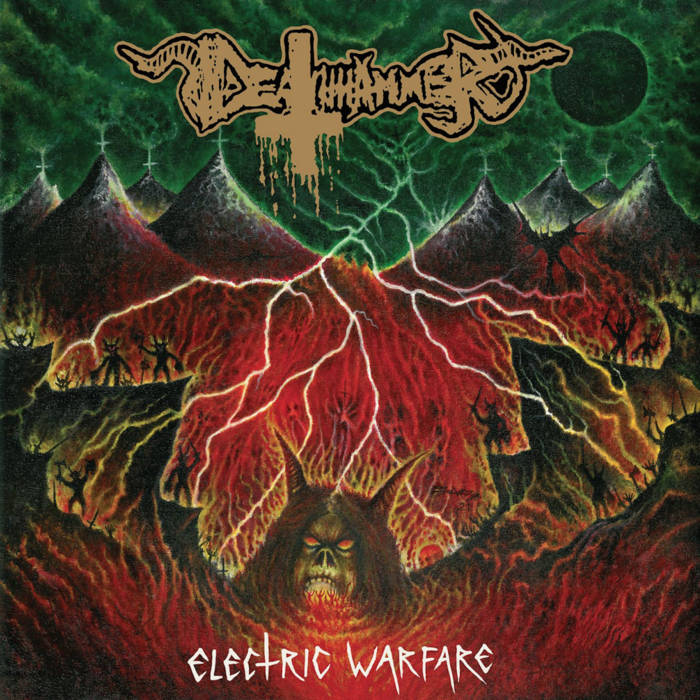 Deathhammer. Do I need to say more? We know this band that has taken a big gulp from the blood-filled chalice of Norwegian black thrash. On Electric Warfare, they surprise with some long compositions that exceed the seven-minutes-mark. That’s a bit difficult for me. I have made myself comfortable in the prejudice that real black thrash must be dirty, straight and to-the-point. But already the first “monumental” track, 'Crushing The Pearly Gates' (6:23) shows that Deathhammer are able to deliver long songs that are neither complex nor repetitive. They just have a good flow. On the other hand, a track like 'Enter The Morbid' (3:01) illustrates that these short, nasty and accurate rockets still work. But it’s not a matter of length – 'Rapid Violence' lives up to its name and hits the listener continuously for five minutes. A short mid-tempo part has only been integrated to improve the dynamic.

Every now and then I get the thought that Deathhammer are acting a little less boldly than in their early days. Some almost melodic solos (or should I say fragments of solos) show up and a small number of guitar lines would also be suitable on a speed metal output. Deathhammer surprise with some airy and nearly light tones, but don’t worry, most parts of the album could still come directly from Lucifer's pen. (But they don't, this guy is supposed to be completely unmusical.) Either way, 'Thrown To The Abyss' should be a song he likes, because its beginning delivers one of the rather rare moments of infernal atmosphere. Usually, the blitzkrieg-like played guitars do not take care a lot for sinister vibes, but for speed and restlessness. The vocals also do not focus on demonic sounds. A pretty high number of high-pitched screams adds an eighties-feeling and so Deathhammer construct a fine bridge between the golden decade of metal and our modern times with its f**king war in the Ukraine. By the way, today Russia confirmed the loss of its flagship in the Black Sea – maybe this was a very successful act of Electric Warfare?

But let’s come back to the album of the same name. Deathhammer haven’t lost their power and their integrity. (This means among other things that the artwork sucks again...) Their crisply and freshly produced release is probably not strong enough to be considered as a new classic and the highlight in their discography. Anyway, Sargeant Salsten and Sadomancer are a well-coordinated team. They haven’t released a disappointing work so far and Electric Warfare continues this interesting line. The duo does not run out of ideas, its music still delivers the necessary amount of dirt and throwaway tracks are fortunately missing. In short, it is always fun to receive lively and underground-compatible albums like Electric Warfare.