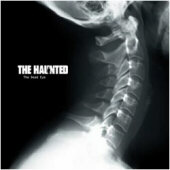 Type: Full-Length
Release Date: 2006
Label: Century Media Records
Genre: Death, Melodic, Thrash
1 The Premonition
2 The Flood
3 The Medication
4 The Drowning
5 The Reflection
6 The Prosecution
7 The Fallout
8 The Medusa
9 The Highwire
10 The Shifter
11 The Cynic
12 The Failure
13 The Stain
14 The Program
15 The Guilt Trip

The first four studio albums of the Swedes are really great, but the here presented work pisses me off. It is the fist in the face of their loyal fans. Just for the benefit of narcissism, the once powerful band betrays its supporters. Anyway, let's fulfil the sad task of writing a fair review for The Dead Eye.

The biggest advantage of the album is its technical implementation. The transparent, powerful and clearly defined sound qualifies the production team for greater tasks. In particular the guitars give you the feeling to listen to a genuine metal album. This is unfortunately just an illusion, because The Haunted are taking pleasure in unfitting experiments. They have integrated a lot of unexpected parts that reduce the power of the songs significantly. Only a very small number of the pieces emits a certain fury. The vast majority of the tunes fail to leave a coherent impression, because the single parts mostly do not blend seamlessly into each other. It seems as if the band wanted to write more "intellectual" songs, but this was no good idea at all. For example, 'The Cynic' has some good leads, but the tranquil verse generates an inadequate atmosphere. Lead vocalist Peter Dolving seems to sit in a sticky bar at midnight instead of entering the stage in a concert hall. Lousy reality. The beginning of 'The Reflection', to mention another example, sounds like a sick version of Oasis and all these components damage the overall impression sustainably.

The worst is yet to come. Dolving's contribution to The Dead Eye is horrifying. He delivers a lot of different approaches and wants to sound lascivious, thoughtful, sensitive, dreamful or, in extremely rare cases, aggressive. What truly irks me is that he behaves like a rockstar who has lost any relation to reality. He thinks he has to entertain a highly sophisticated audience, but any type of academic art lover is not interested in this shitty little band from Sweden. Worse still, true metalheads must realize that Dolving does not take care for their expectations. This is annoying. A band whose only aim is self-realisation at all costs should not go into the studio. Play for yourself in your stinking rehearsal room and don't tempt us to buy your nonsense. Okay, 'The Medication' is a fast track in the vein of their previous speed attacks, but it is far away from destroying the speedometer. This track seems to have an alibi function and its only purpose is the sedation of the old fans. 'The Shifter' points in the same direction at the beginning, but a break kills its fury in a matter of seconds. It's an ironic twist of fate. On the one hand, the band wants to expand its musical horizon for the benefit of its complacency. On the other hand, The Haunted try everything in order to satisfy everyone. The result is that I am totally dissatisfied. The majority of the tracks just sucks due to aimless guitar lines, psychedelic interludes and paltry choruses.

The limited edition comes with four video clips and a making of documentary. Not to mention the two bonus tracks, for example 'The Highwire', a ridiculous instrumental which surprises with the formidable length of 50 seconds. All these additional offerings cannot change the miserable appearance of The Dead Eye. I wish I had two dead ears.