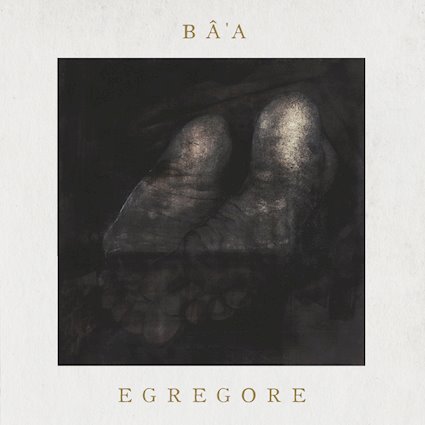 I like black metal albums whose first notes immediately create a creepy atmosphere. They give me the good feeling that I am not wasting my time. Egrégore, the second full-length of its creators, belongs to these works. A sinister guitar chord promises despair and depression, but don’t think of whiny suicidal crap. 'In Umbra et Luce' does not neglect a dense brutality and the gapless production radiates a disturbing horror. It may be that the semi-legendary Nehёma are an influence for Bâ'a, for example at the beginning of the cold and vehement 'Domitor'. In any case, the icy high-speed episodes remind me of the old masters from Chambéry.

Nevertheless, just like any other French black metal band, Bâ'a do not present slavish imitations. Rather true is that they have an enormous portion of individuality. The general approach focuses on cruelty, inter alia because of the insane tempo, the intense guitars and the mostly distorted voice. Yet there are also moments of tranquillity where the fragile-sounding French language provides a contrast. Either way, the outbursts of raging misanthropy characterize the six songs of this album and even the less tumultuous sections are free from any signs of hope. The very well staged beginning of the slowly crawling 'Fames' provides evidence and opens the gates to a dimension of total hopelessness.

Bâ'a don’t do many mistakes and they do not run out of ideas. All songs are cleverly arranged, neither half-baked nor boring. Okay, at the end of 'Bellum', an echoing sound effect goes wrong and gives the song a somehow unnatural colour. But generally speaking, each and every second of the 42 minutes offers the option to drown in pure blackness. This is black metal that comes from the underground or even below, not in terms of the professional production, but with regard to the dedication of the artists. They must be extremely good actors, if this performance is not based on conviction and honest enthusiasm for the music they play. To create such a monolithic record is nothing for weekend maniacs, because it has style, depth and sustainability. You can be sure that you will not forget this musical content as soon as the album has come to its end. Moreover, Bâ’a have kept an eye on the entire package. Both the simple, colourless artwork and dignified design of the booklet express their stylish approach visually. The artwork, for instance, shows death in a very cautious way – nevertheless, it cannot be misunderstood. Thus, I admit that this work takes me to the core, the essence and the blazing fire of the sub-genre. Hopefully, you make a similar experience with this output.