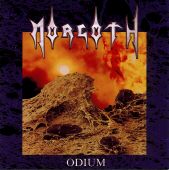 All freaks that have a weakness for bands with a broken and inconsistent discography should give Morgoth a try. The main part of their outputs consists of pretty generic death metal and this is not a bad thing. Yet their best album marches to a different drummer and by the way, their worst as well. Feel Sorry for the Fanatic fell by the wayside and the fact that it is a kind of close relative of Odium marks the only disadvantage of the here presented work. Yet Odium is, when taken in isolation, absolutely flawless. Usually I do not yearn for industrialized metal, but here comes the exception with stirring power, uncompromising severity and threatening chasms.

As mentioned above, Morgoth have broken the death metal chains that do not allow great stylistic changes. The group is not interested in half-hearted measures, the guys take a truly big step. The production has nothing in common with the low-tuned feasts of the lethal genre and the music itself releases a lot of energy, much more than many run-of-the-mill death metal records. Morgoth make good use of the situation that they are now free to vary the degree of heaviness, velocity and dynamic. They are no longer slaves of the well cemented approach of the lethal sub-genre that requires a permanent low-tuned wall of sound at the expense of flexibility and dynamic. This does not mean that the band is afraid of frenzied vehemence. "Resistance" shoots its bullets right into the head of the listener. Sawing guitars and pulsating drums kick off a track that does not lack of high-speed parts. Occasionally occurring hammer blows contribute the industrial element, but the pure metallic components shape both the song and the entire album.

"Resistance" puts the focus on frantic brutality, but other songs rather score with their subliminal malignancy. Morgoth never neglect the necessary amount of heaviness, yet they also create ominous, profound or hypnotic sections. They are great, because they deliver an increasing intensity. "Submission" - which is equipped with a very memorable line - can be mentioned in this context, but the prime example for a slowly yet steadily intensifying number is "Golden Age". Experience how excitingly the unholy mood grows after the break at 3:19 and enjoy the variations of the ingenious riff that bring back the murderous death thrash parts from the first half of the song. (I admit that the last sentence could be stolen from a promo sheet, but my catholic mother told me that I shall not lie.)

The album spreads much more energetic vibrations than the previous death metal works that always kept sticking in their ancestral home. It's almost adventurous to see how the formation has transformed from a bloody death metal horde into a musically variable and lyrically interesting union of artists. "As we rise, we fall, do you wonder at all" and comparable lines describe the state of mankind in a rather pessimistic way, but who would say that the Germans are completely wrong? Sometimes it seems that all will end in fire and the song pattern of "War Inside" reflects exactly this prognosis. From its ponderous beginning to its cataclysmic ending, the song stands for the then "new Morgoth". Grewe's hoarse yet vigorous vocals are much more charismatic than before and his authentic fury, desperation and combativeness shape his style of singing in a brilliant way. By contrast, deep growls are a thing of the past.

Are there only some good or maybe excellent songs? Definitely not, Odium works as a whole. It has a very good flow, shines with homogeneity without being monotonous in any way and it opens a door to a new dimension without showing the smallest signs of commercialism. Some of the riffs are sharper than each and every riff of the previous work and a horrific component is cleverly integrated. I am not sure whether the relatively soft closer, an instrumental with some floating tones, is on a par with the remaining material, but honestly speaking: it doesn't matter. Odium is, from my point of view, an underrated masterpiece. It remains a pity and a mystery that it fell on deaf ears.