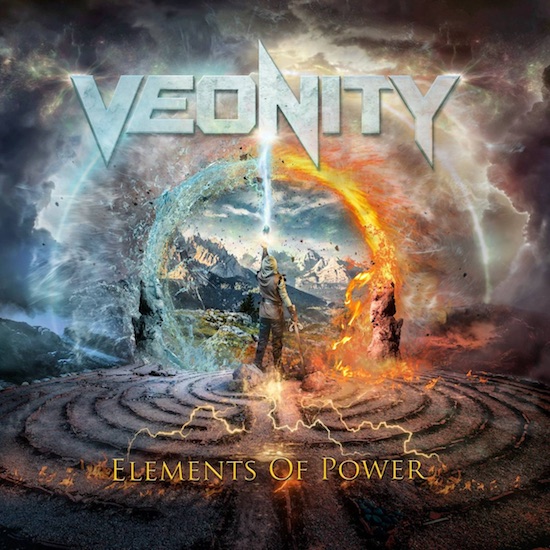 Type: Full-Length
Release Date: February 18th, 2022
Label: Scarlet Records
Genre: Power
1 Beyond The Realm Of Reality
2 The Surge
3 Altar Of Power
4 Elements Of Power
5 Gargoyles Of Black Steel
6 Dive Into The Light
7 Facing The Water
8 Blood Of The Beast
9 Curse Of The Barren Plains
10 Return To The Land Of Light
MetalBite on YouTube

Truth to be told, Veonity has always been more of a hit-or-miss band for me. But by this point, there's no denying that they meet my standard of "consistency is a virtue" well enough. And for that I still have respect for them. So to speak, this LP is definitely filled to the brim with all the elements of power metal. Some tracks arranged them more to my taste than others.

'Beyond The Realm Of Reality' kicked off the album well enough, and it heavily hints at what the rest of the album will sound like - fast, upbeat, catchy Europower. The riffs are flashy and melodic, the bassline steady and punchy. The drums drove on with speed and blast beats not quite unlike those of Dragonforce. My attention had wavered on 'The Surge', mainly because the chorus here dragged out a bit too long. Then the more anthem-like 'Altar Of Power' pulled it back with its insanely infectious chorus. It did not take me long to start singing along to "Hear them call. Sacrifice. And the demon from the Abyss will rise". By the title track the one resemblance that had been bothering me finally clicked - of course, this release has got a certain Reinxeed energy to it. Not just concerning the vocalist, though Anders Sköld does have that Tommy Johansson lisp to him ( bruh, talking about strong Swedish accent and high and soaring vocals). But also because the amount of orchestration and keyboard here had gone up visibly as well. Not too overwhelming, but enough for me to make some connection to Reinxeed's "1972". After 'Gargoyles Of Black Steel', another speedy song with a somewhat absurdly upbeat chorus, the fillers of the album starts. I did note that 'Dive Into The Light' solos have got a certain Freedom Call feeling to it, but the rest just flows by me. I refocused on the last two tracks again. 'Curse Of The Barren Plains' proved to be the more modern track here, the rhythm being more dynamic and there's that pumping synth threaded throughout the track. 'Return To The Land Of Light' (hey, I thought 'Land Of Light' was supposed to be Freedom Call's exclusive property?) seemingly to struck a full circle in the album's structure, as this is almost of the same formula as 'Beyond The Realm Of Reality', albeit with a stronger synth work and there's this voice-over part. Still, I like it when the band chooses to arrange their songs in this near symmetrical sense.

Now, concerning lyrics, Veonity had covered quite a range of topics throughout the year. At first it was gladiators, then we were space Vikings searching for Atlantis or something like that. Their last release went for a bit more obscure and abstract concepts. Well, take a guess at what we have this time? Right, we're indeed in search of the Elements Of Power. Though I have yet to make up my mind whether or not there is a clear storyline in this, there's no doubt to the general gist and the fact that we're back to the fantastical themed lyrics - at least there's no Vikings this time.

Sure, this album is still more of a miss than a hit for me. But they had managed to arrange the tracks in such a sequence that kept my general interest and pulled me in. And there's no denying that the musicianship here is slick. There's everything I could ask for, but somehow they just don't kick.

Highlights: 'Beyond The Realm Of Reality', 'Altar Of Power', 'Curse Of The Barren Plains'