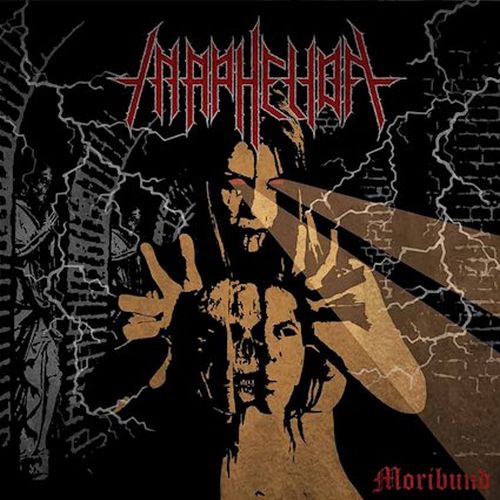 Good music makes our lives better. It is therefore laudable that Sebastian Ramstedt, member and highly competent composer of the mighty Necrophobic, surfaces with another band. On the other hand, his new playground does not differ very much from his original area of activity. There is a lot of Necrophobic in the debut of In Aphelion (just remember the name of the intro of "Dawn Of The Damned") and in the band’s line up. Johan Bergebäck is, exactly like the mastermind himself, involved in both bands. But I fear I am losing myself in irrelevancies. Maybe it makes more sense to begin with this statement: songs like the perfectly flowing, fast-paced 'Let The Beast Run Wild' or the harsh yet partly triumphant-heroic 'The Origin' are great. Necrophobical, so to say, and this is meant as a compliment.

Of course, Ramstedt, the spiritual father of the best songs of the last two albums of Necrophobic, namely the unbelievably intense “Sacrosanct” and overwhelmingly haunting “Mirror Black”, still knows his trade. He and his comrades have a knack for smooth song patterns, eerie melodies and the right degree of drama. Moreover, it goes without saying that In Aphelion deliver a production which is on par with the least releases of Ramstedt’s and Bergebäck’s main band. Everything sounds crisp and clean, perhaps a bit too much polished, but never sterile or soulless. And to avoid misunderstandings: in terms of cleanliness, the vocals mark the exception to the norm. Ramstedt’s throaty, pretty diabolic and adequate vocals have an impact. It’s no outstanding performance, but a good one. (Nevertheless, it becomes obvious why Anders Strokirk – and not Ramstedt –delivers the vocals for Necrophobic.)

A very special song is 'Luciferian Age', a comparatively slow number. It is based on an almost soft guitar line, but holds a massive amount of atmospheric density. It also does not lack harshness – somehow the song manages to present a very extraordinary combination of mild and all-encompassing elements. Whirring guitars meet broad double bass bombardment and “mischief” in written in big letters over the entire song. A demonic, apocalyptic grower – and, by the way, the shortest track on Moribund. Here I come to one of the few weak points. Two or three songs, inter alia 'This Night Seems Endless', are too opulent, not painfully overloaded, but they more or less lack compactness. That’s not the only thing I want to mention in this context. Sometimes it seems that experience beats excitement with the result that everything sounds well, but also well-known. Moribund is rather a record of mature artists than of adventurous fireheads. It’s a (very) good work, the only thing I miss every now and then is the ultimate thrill.

But don’t get me wrong. There are legions of competitors who do a worse job than In Aphelion. Perhaps my expectations are just too high when it comes to something that is connected with Necrophobic. Therefore I can fully recommend Moribund to everyone out there, especially for those who like precisely playing musicians, a mix of melodramatic, fiery and atmospherically dense sequences and a proper degree of catchy moments. 'He Who Saw The Abyss' is one of the tracks where all these components are put together in a very masterly manner. But is goes without saying that one should get in touch with the remaining nine tracks as well, because good music makes our lives better.

Just a few months after the very nice appetizer EP called Luciferian Age Swedish-Dutch collaboration In Aphelion (the trio consists of Necrophobic and Cryptosis members) release their first full-length album Moribund. If you know the demo and the EP already, you may think you know what you will be dealing with within the next hour but beware because some tracks do have a quite different approach than what you know from previous releases.

The album starts with a very nostalgic intro taken from a horror movie and it fits really well with the pretty old-school cover which was designed by Sebastian Ramstedt himself. Soon this ill-fevered atmosphere turns into a relentless and awesomely fast black metal track with really hateful vocals. This doesn't mean that you will only find a sheer black metal here because there's always a very melodic and playful red line within the compositions. You can also clearly hear the thrash and classic metal influences Sebastian Ramstedt has in the riffs (especially the guitar solos). The next three tracks were already released on Luciferian Age and the demo and in my opinion, they are very atmospheric and rousing. I won't talk about them in detail because I did this on my previous reviews and don't want to repeat myself here but what I can say is that I have a feeling that these tracks will become some classics because of their very catchy nature and their high recognition value. The nightmare continues with a quite slow and gloomy track called 'This Night Seems Endless'. Sebastian’s vocal creates a very sinister atmosphere (I see a demon longing for the souls of some innocent victims in a very dark night and nobody can escape it) and through the very slow and simple riffing the band creates a somewhat icy feeling (at least for me) and I get some shivers running down my spine. 'The Origin' starts as another slow track but within its course it turns into a song that could also fit perfect onto a Necrophobic album. I guess this is the one on which you can hear most clearly that both guitarists (the second one is Johan Bergebäck) are involved in that legendary Swedish band. 'Sorrow, Fire And Hate' is an absolute neckbreaking track with a lot of tempo changes and superb guitar leads. Marco Prijs drumming is very precise, and I have to admit that he too did a superb job on this album. The closer 'Requiem' is the most atmospheric track on Moribund and one of my favorites where once again, we can hear a very fast piece underlined with some fantastic guitar leads. A very epic, yet dramatic song is created through these instrumental arrangements and it's really worth listening to few times in a row. What I find remarkable (not only on this track but in general) is the playing technique Sebastian Ramstedt is utilizing here that lets the guitar sound slightly like keyboards at some points. He told me that this is a trick that Michael Schenker used to do with his guitars too and it sounds fantastic.

Please notice that although I only talked in detail about some tracks, the other ones aren't weaker in any way. This is a really great release and if you have the opportunity then listen to it with good headphones on, you will notice so many more (little) details in the songs that you might not get while listening on a stereo. At least this is how I experienced it. The album is produced very well and I couldn't find any things on it to criticize. Maybe the total running time of 58:05 minutes may be a small point to grouse but that would be grousing on a very high level. Moribund is a very entertaining album in my opinion and together with the new Kvaen is one of the early black metal highlights in 2022. It will be hard to top.