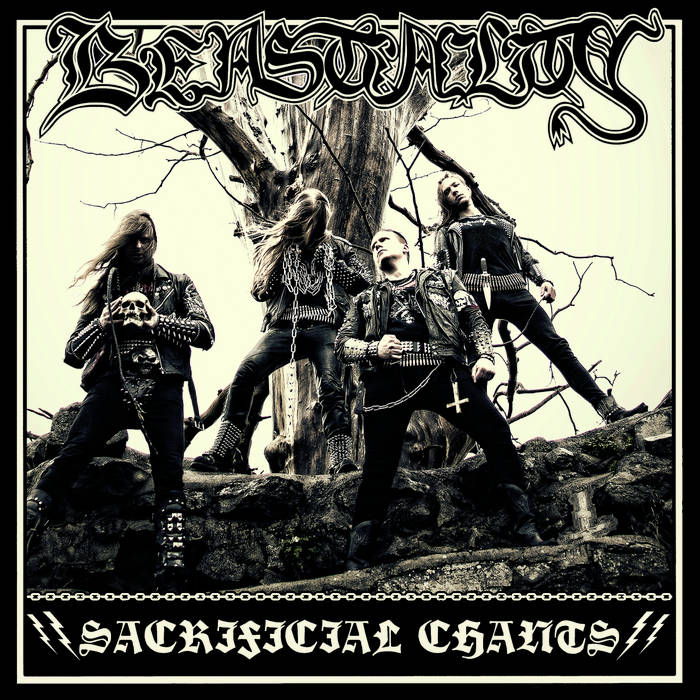 Good and ripping black thrash is particularly hard to come by. There’s only a small number of bands that can be truly worth being invested in, and as expected from cult Irish label Invictus Productions, we have a new EP by Swedish act Beastiality titled Sacrificial Chants.

Beastiality are indeed a black thrash metal band, and following in the path trailed by mighty Nifelheim, they play classic and filthy black thrash. They originally made their mark in 2017 with Worshippers Of Unearthly Perversions, and displayed a truly venomous and unrelenting style of black thrash that’s more extreme and aggressive than other acts, but with some interesting elements added for seasoning that also lend themselves well into this particular subgenre and without disrupting the essence.

That’s still very much the case with Sacrificial Chants, and while it might be more of what the debut offered, that’s by no means something bad, if anything this EP is like a dessert after a rich and substantial main course. In regards to the actual music, where Bestiality shine is how they manage to push the extremes of black-thrash, while maintaining a catchy energy that’s in line with classic thrash metal, as in "Kill'em All" and "Show No Mercy" but twisted through blistering speed and a sinister atmosphere. They accomplish this by upping the aggression to near death metal levels, but at no point does this record changes subgenres, its firmly and unambiguously a blackened thrash record. The guitars, bass, drums and vocals make it pretty obvious, but at them same time, this is definitely one of the fastest and most aggressive black thrash bands I’ve come across.

Aside from how fast and intense this record is, the music’s sinister atmosphere is accomplished primarily through the vocals of new members Totalitarian Commander of Unearthly Perversions and A. Död, who also handle bass and drum duties respectively. The former has that classic dry and raspy shrieking style of vocals that perfectly suits the punishing music, but also has a howling and echoing quality that’s boosted by the former, which combined with the evil riffs this band has, and the drumming give Beastiality that unique edge that no other black thrash band has.

The production of this EP is also noteworthy as the band’s sound benefited from a more polished production to enhance the sinister and unhinged performances, while most black thrash bands and black metal bands in general prefer or choose a gritty production, if this same music as it is had that raw tin can sound it would probably be near unlistenable because of how unforgiving the music is, so the high quality production is certainly a plus.

Overall Beastilaity continue their streak of excellent black thrash. The only real complaint I have is that this EP is more of what they did in their debut, it's still solid and the band still managed for this mini album to be a complete and stand alone work, but I’ll still look forward to their next full length.