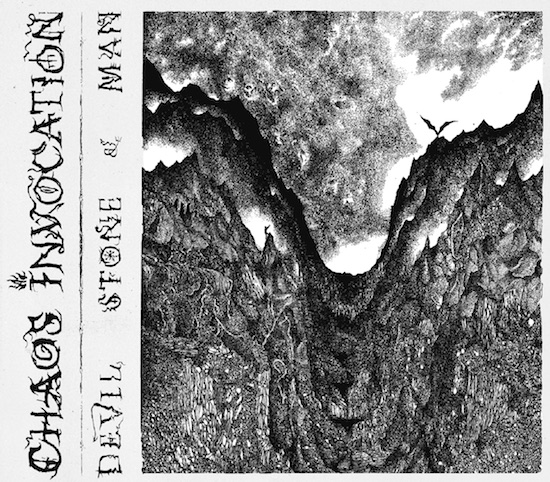 Finland has an ever-fertile black metal scene, that’s right. But other countries are not lazy as well. Of course, Germany has roughly ten times as many inhabitants as Suomi. Nevertheless, its output in terms of the black acoustic art is fascinating as well. I admit that my radar is not big enough for all these outbursts of diabolical aggression that originate from my homeland. Therefore I was not aware of Chaos Invocation so far. An album like Devil, Stone & Man teaches me that this was a mistake. Chaos Invocation master the devilish challenge of creating a convincing black metal album (including a great artwork) with great ease.

Okay, we are speaking about the fourth full-length of the band. Therefore one should be able to assume a certain maturity. However, it feels good to see that Chaos Invocation do not disappoint in this regard. Without hurting the guidelines of the subgenre, they present a broad range of evil. 'Strike Of The Dominator’s Fist' portrays a befitting opening full of hatred, violence and infamy, the first half of 'Diabolical Hammer' points in all its fateful gravity in the direction of young Tom G. Warrior and 'Ordonata Fields' holds some pastoral moments. These tracks are wrapped in a sound whose directness, offensive power and permanent viciousness makes you think "this is what black metal must feel like". This is no one-dimensional work which focusses only on icy hyperspeed guitar lines. It is also not the most violent album of the subgenre. But it conveys authenticity and inner strength, even in its slightly weaker parts.

Slightly weaker parts? You will not find any in the highlights. 'Where We Have Taken The Cross' marks an extremely coherent explosion of dark forces and its precisely set background vocals add a triumphant and catchy detail. This is one of these glorious songs where all hell breaks loose, but the melodic element never disappears completely. Some spooky lines in the vein of Sweden’s Pest (when they were still good) also occur. Everything works brilliantly and the same goes for 'Triple Fire'. Among other sings, this vehement track holds a fantastic guitar solo. But everything else also makes me feel that black metal is the right escape point to get away from the daily shit. (So much shit in the world, unbelievable!) 'Curses Upon You' if you see it differently, because this song is another brute yet controlled battle. Once again Pest shimmers through some lines, but Chaos Invocation follow their own rules and do not copy anyone. Their songs sound like a mix of Teutonic and Swedish black metal and I guess, there are clearly worse combinations. Finland, by contrast, does not play a role here. Actually a shame, but here it does not have a negative effect. Quite the opposite – Chaos Invocation show their enormous potential and I miss absolutely nothing. Even the calm closer is okay (and it is no matter of course that I have a positive word for an acoustic instrumental, haha).

Germany is a country that is no stranger to metal, one could also consider them a key country in the development of extreme metal, for better or worse, but I digress. On that same topic, it is also a wellspring of black metal, and after four years, Chaos Invocation returns with their fourth opus Devil, Stone & Man, to be released by W.T.C. Records.

Chaos Invocation has been around since 2004 and have consistently released quality Satanic black metal that’s equal parts intense, punishing, disharmonically melodic and with an appropriately dark atmosphere. They’ve been improving with each album since 2009 and with Devil, Stone & Man the band continue this upwards scale of improvement, and it is by far one of their best records yet. The first and major improvement is in the production quality. While Chaos Invocation have always had relatively good production in terms of full lengths this record is their best sounding, courtesy of Dark Fortress mastermind V. Santura and with Davide Gorrini of Frostmoon Eclipse fame handling the drum recording. The excellent production is one of the key ingredients in this record being outstandingly good but actual music and performances of the band are also flawless and precise. The guitars of founding member A. have a harsh and screeching tone which seamlessly works for both fast and furious riffing, as well as the more melodic and technical passages, and this also extends to the soaring soloing work. The drumming of Omega is top notch, as expected from a veteran of his caliber, and I believe the vocals of co-founding member M. give Chaos Invocation their uniqueness. His growling and raspy vocals (also featured in uncanny choirs, and growled spoken word like passages) perfectly tie all the music together and complete the utterly dark and ritualistic atmosphere. A. also contributes some vocal work, and the whole result is demonic in the best possible way. The bass work of Tumulash is the one area that’s not quite outstanding but it does the job well enough, and he succeeds in both complementing the guitars and matching the speed and technical proficiency which is also an admirable trait.

Furthermore, what makes this record sound so good is the band’s performance as a unit. Both the excellent production and individual skills of each member are key components, but how it all sounds together is where Devil, Stone & Man truly shines. The band has always excelled at balancing fast and aggressive music with more technical and melodic elements. It is very dynamic and sprawling, without feeling bloated or rushed and the band can keep the momentum of furious anthems like ‘Strike Of The Dominator’s Fist’ and ‘A Stranger’s Pale Hands’ and organically switch to somber dirges like ‘Diabolical Hammer’, as well as to venture in somewhat Avant-garde territories that are reminiscent of Deathspell Omega and Aosoth like ‘Odonata Fields', and the instrumental final track ‘Sacrifices’. They successfully switch back and forth between speed, aggression, melody and technicality throughout the album, all the while never losing or discarding the Satanic atmosphere and authentic performances. And with a runtime of 44 minutes, the whole experience is concise and substantial, as nothing is protracted or rushed.

Overall, Chaos Invocation continues succeeding in maintaining the spirit of true Satanic black metal as well as pushing the boundaries of black metal with their own signature. The only real issue here is how the record is pure black metal, and therefore, purposefully inaccessible, but this is one of those records that’s worth engaging with and soldiering through the harsh sound and punishing atmosphere.

Best tracks: ‘Strike Of The Dominator's Fist’, ‘A Stranger's Pale Hand’, ‘Odonata Fields’, ‘Curses Upon You’, ‘The Revolting Abyss’