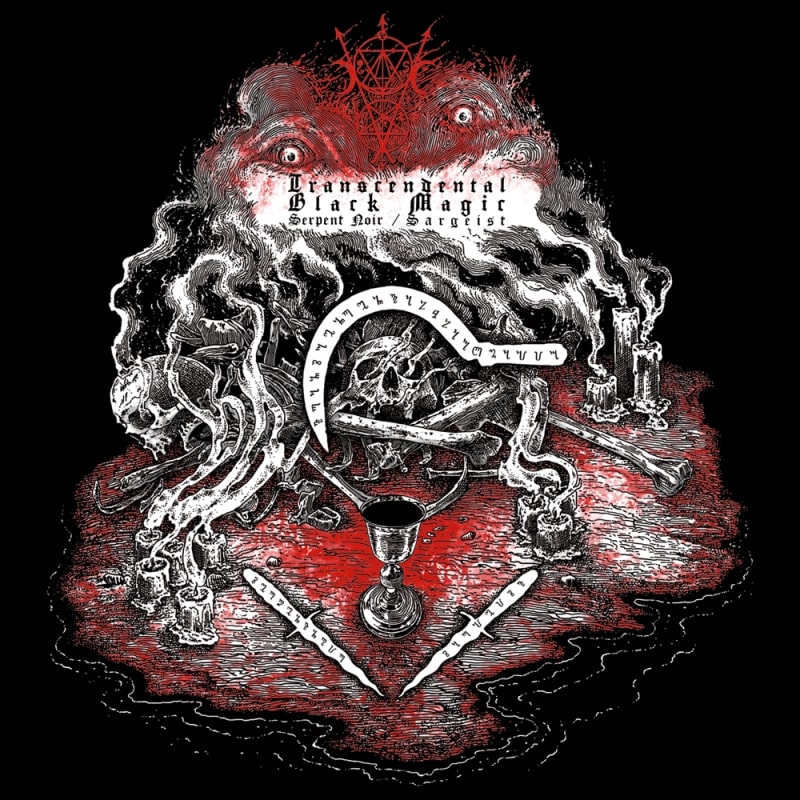 This is my first review in a time of war and the horrible pictures we see on TV make it hard to put the focus on a metal review. But we need a certain degree of normality and so I want to turn the spotlight on this split album. The first thing that comes to my mind is that both Serpent Noir and Sargeist represent their countries in a pretty typical form. The dudes from Greece follow a more or less mild, sometimes occult approach with sometimes clear, sometimes lamenting vocals. By contrast, Suomi’s unit dishes up an icecold, hateful piece of raw emotions. I admit that I prefer the Finnish style in general and this applies for the result of this cooperation as well.

Serpent Noir present songs with almost rocking rhythms. They emanate the spirit of black metal, not permanently, but predominantly. However, I miss the intensity of the more fanatic form of the sub-genre. From the transcendental beginning of 'Throne Of Satanas' until the relatively sharp guitar line at the end of 'Daemon Behind The Bars', Serpent Noir avoid severe mistakes, but there are not many sequences that whet my appetite for more. Whenever they accelerate the tempo, they come closer to the core of the total blackness, but the high number of mildly flowing parts prevents a greater listening pleasure. No doubt, there are some really good moments. The first up-tempo part of 'Endless Night Of Lilith' arouses my interest in the song, but the number cannot keep what this part promises. Generally speaking, the songs should be a bit more compact and less repetitive. I miss some rough edges and corners, but people who accept a slightly weaker edition of Yoth Iria will enjoy these songs and, as said before, some parts have its charm.

The info of W.T.C. productions speaks of “seven tracks in total dealing with life-changing events”, but the only thing that changed while I was listening to Serpent Noir was that I got 23 minutes older. Sargeist do not open my eyes for new dimensions, too, but they are responsible for the more impressive half of the release. It’s the Finnish way to say hello: you open the door and immediately a blizzard comes in. Without warning, of course. The sound is so dense that nearly everything blurs together. Where the Greeks focus on fine transparency, Sargeist tend to be simply massive and ruthless. Their endless streams of pitch-black guitar lines form the highlight of the output. 'Spirit Nox Famuli' behaves like a rabid dog. It bares its teeth, it hisses and cannot hold still for a second. Especially its straightest reveal the full glory of the ever-fascinating genre. Maybe Serpent Noir’s songs can claim a higher degree of individuality for themselves, because the tracks of Sargeist would not be no foreign objects on albums of Malum, Azaghal or Aegrus. But in my humble opinion, these bands and the further five million units from Finland have defined the modern, still cruel face of black metal and that’s a good reason to enjoy their art.

On the whole, Sargeist (80%) defeats Serpent Noir (62%) and it is no bad idea to check this split. Nevertheless, in these days the true winners are all people who follow the command of their conscience – without becoming a criminal aggressor, as is evident.