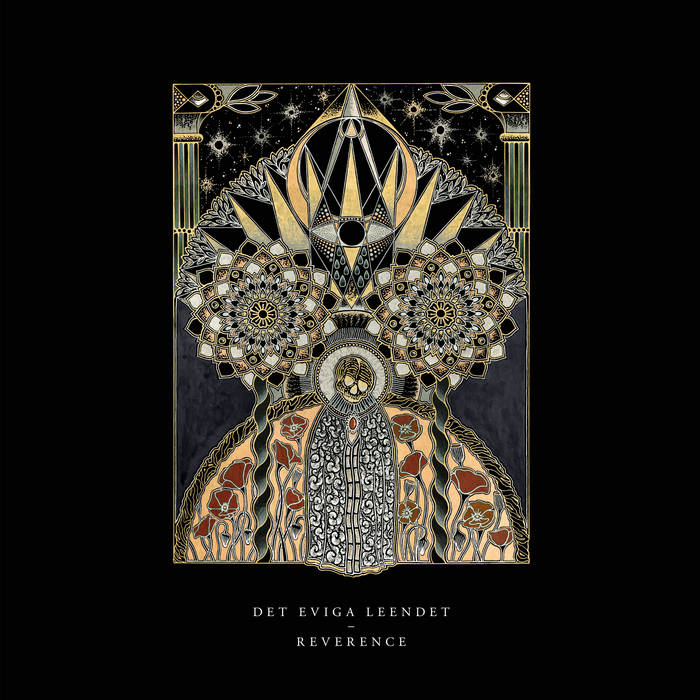 Another album that has intrigued me this month, even if it does not quite have the overwhelming impact of "The Mist From The Mountains", is Reverence, the second album from Det Eviga Leendet (which translates in to English as The Eternal Smile). This Swedish / American black metal troupe are operating on the fascinating and ever-moving margins of the genre, and although not as avant-garde as (early) Solefald, they tap into the same sort of disquieting quality, through their combination of layers of ghostly static noise with strange and hypnotic guitars employing unconventional chord voicings and note choices. These guitars are frequently set to a grating blast, although this is far from the default setting of what is an inspiringly restless and varied album.

The overtly metal sections of each song recall the abrasive and warped riffing that characterised the Blut Aus Nord sound at the turn of the millennium, as they began to develop their sound from their more orthodox beginnings, but Det Eviga Leendet are equally as compelling when they take their foot off the throttle. They do this to great effect on the excellent 'Visage', where fragile shards of guitar are overwhelmed by the frankly terrifying shrieks of despair contributed by Mare Cognitum's Jacob Buczarski, who clearly knows a good thing when he hears it. Through the final strains of the spectacular 'Yield', which pulls the band a little closer to the kind of mournful and yearning black metal of American bands such as Panopticon, it is clear that Reverence is a difficult, but rewarding experience, which makes no concessions to the comfort of the listener across its six bleak and lengthy songs. Despite this, the quality of the band's music is such that it draws one in, like a light in the dark that mankind trudges gradually towards, only to realise that it is the fire that will incinerate us all, leaving only eternal darkness.