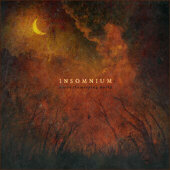 There comes a time of bleakness in everyone's life, a time when the world seems like the cruelest and most heart-rending place imaginable. Light hides behind distant mountains and you believe with all your conscience that you'll never see it again. You wretchedly cling to even the smallest hope, desperate to make it last as long as possible and not let it run through your fingers. But inevitably, the final trace of it will soon fall and vanish into the dead soil at your feet, and the miserable search will repeat until you somehow find another speck of luminescence. You'll once again bask in it, treasuring every moment of its warmth, and then it'll be gone. You see visions of a time where you've found happiness, but you know deep down that it's nothing but a hopeless fantasy. The reality hits you and you see what you perceive to be the real future, one where years have passed and everything in your life has changed, yet you're still trapped foraging for fleeting hopes.

It's a punishing, harrowing cycle, one which has been repeated since the dawn of man and one which shall continue until the last human is laid to rest and Earth is left a barren husk. Though they took a different form to each individual, people realized that the sparks were something they all sought, the hunt for them a burden they all shared. The light became known. People learned to love it. And eventually, it was given a name: Solace.

Today I look at the most brilliant light of all, a mote of radiance brought forth by Insomnium, one of Finland's many legendary melodic death metal acts. After two separate forays into the land's most desolate waterscapes in 2002's In the Halls of Awaiting and 2004's Since the Day It All Came Down, the foursome returned, carrying with them their darkest and most brooding yet also most hopeful and reflective release.

There's a lot of parallels to be drawn between this album and the previous one. In my last Insomnium review I described Since the Day... as "A voyage into a mirthless, callous world, a journey across frozen planes, through gloomy forests and into starless nights with pale moonlight as your only companion." Above the Weeping World travels even further into pure misery, confronting extremities of bleakness that even the sophomore album didn't touch on; Since the Day... was an album about meandering aimlessly through the night, wondering what went wrong to bring you down this far. Above the Weeping World, in contrast, sees you desperately seek a way out. You set the black earth ablaze in a search for solace, you give everything you have looking for a light, and if you fail to find one... Well, we'll get to that a bit later.

The curtains fall to reveal a forlorn autumn scene. Through rainfall pattering against dead leaves breaks a piano melody, and with it a gloom that will swathe you for the duration of the album. Enter the guitar. Like despair's cold hand the first riff reaches out, grabs you, and pulls you deeper into the murky darkness than you thought imaginable.

Throughout the release the lead guitars continue to be by far the most memorable element. I believe Above the Weeping World is home to some of the most powerful melodies not only in melodeath but in metal as a whole. There's an interlude after the first chorus in 'Change of Heart' which perfectly reflects everything I've said about the album so far - it starts out with an acoustic/keyboard reprise of the intro to the track before electric guitars kick in, which sound like something you've heard hundreds of times in this genre, but the image it paints is like no other. Despair resonates from every note and takes over every fiber of your being, yet at the same time it's fucking wondrous. Sometimes you have to go through the most harrowing and painful emotions this world has to offer to truly appreciate the beauty it holds, and this section is the single best illustration of that I've ever experienced.

While we're on the topic of that interlude, notice its form: a quiet part crescendo into a powerful, melodic climax. Sections containing this structure are in some way incorporated into every single track from here on, never losing any amount of their emotional weight or power. 'At the Gates of Sleep', for example, is half the reason for the entire introduction on solace; with reassuring calmness between each verse and beautiful natural imagery abounding, this song offers you a forest in the twilight in which you can rest and temporarily escape your struggles. It's not a happy song - the low riffing and Niilo Sevanen's pained roars make sure of that - but it's an intermission, a short respite from the pure misery imbuing every other track.

And that's just what most of Above the Weeping World is - pure misery. 'Drawn to Black', for instance, contains some of the most gut-wrenching lyrics about breaking up I've ever heard. The protagonist has stopped pining for his love, he's thinks he's over it, then all of a sudden a tiny sight reminds him of her and he's plunging back into darkness. It's almost as if the world's mocking him. In the second half of the song, Insomnium as always use descriptions of nature to convey the emotion, and Sevanen's delivery on it is phenomenal - not only do his growls feel pained and genuine, he sounds like he's on the verge of tears. 'Last Statement' is a similarly dreary track, but the theming and execution couldn't be more different; where the vocals on 'Drawn to Black' are meandering and helpless, on 'Last Statement' they feel completely controlled and enunciated. And the very first line tells us why:

"With these final steps I take back my freedom..."

It was inevitable, really. On a disc radiating as much agony and depression as this one, suicide had to come in at some point, and this track is definitely worthy of tackling the subject. A strange peace and acceptance swathes most of the song; the decision to leave the world has been made and now all there is left to do is go through with it. However, this changes with my favourite use of another recurring element within the album. Often, at around the midway point, a song will break free from any kind of structure and completely change in tone. 'Mortal Share' goes from questioning the existence and cruelty of gods to examining the purpose of mankind as a whole, 'Drawn to Black' transitions from bitterness at their past lover to lament over losing them, and here... You guessed it. The break here is the protagonist realizing that, even after all the time they've spent talking about how they've made peace with the world, they're scared. They don't want to die without leaving something behind, and in the wake of these emotions we're treated to what I consider the most emotionally profound guitar solo of all time. It's somewhat ambient and staggeringly melodic, giving it an almost transcendental, otherworldly quality; it's the knowledge that you're about to leave this mortal sphere and discover what lies beyond, but Sevanen's screams as he scrambles against it are utterly chilling. "Don't forget me" is such a simple phrase. But it's repeated again and again, ground into you, every moment closer to fading away until it's no more than a whisper in the background. And in the next moment, it's gone.

So that's the story so far. Six songs of sorrow, one of solace. You've been dragged into misery, you've found a light under starry skies in a thicket of fir-trees, and then it's drained away, taking you even further from the sun. Considering the symphony of suffering that makes up the first eight tracks, it's apparent by this point that Above the Weeping World is going to need something quite special to end it off. Enter Track 9, 'In the Groves of Death'. With a soft acoustic intro leading into combinations of whispers and roars and melodies and riffs, this song epitomizes everything Insomnium have tried to do on the album in one final display of raw torment intertwined with hope, solace and beauty. The first half is pretty par for the course as far as the band goes, with a standard verse-chorus-verse-chorus structure differentiating itself through particularly evocative lyrics. However, in the middle, at that breaking point I mentioned previously, 'In the Groves of Death' truly becomes the brilliant album closer that it is. A melancholic quiet section sees the speaker decide that this graveyard, above his buried father, will be his final resting place. It feels utterly final, a reflection on a life now past with no hope of ever returning, but just as it seems to be ending we're dropped straight back into a triumphant guitar melody, leading into three final verses in which a speech from the spirit of the protagonist's father changes his mind and makes him decide to live out the rest of his days after all. I particularly love the parallelism between the first and last verses; notice that the world itself hasn't changed and is still described as "darkling" and "dreary", but his perspective on it is now different. The album culminates with one last reflective solo that settles into a slow piano melody and, as a beautiful callback to 'The Gale', fades into rainfall. It's a wonderful bookend to the album, leaving you with the feeling of having come to the end of the longest and most important journey of your life. And you know, the world always seems a little brighter afterwards.

You may think from this review that you have to be depressed or on the verge of ending it all to enjoy this album, but that couldn't be further from the truth. I fell in love with Above the Weeping World during what I now consider one of the best times of my life. In the highs it was a breathtakingly cathartic outlet like no other, and in the lows it's been the most powerful and radiant solace I could possibly ask for. Insomnium have composed a modern classic, in my opinion the most profoundly emotional album ever released - agonized yet hopeful, despairing yet aflame with splendor, I can safely call Above the Weeping World my favourite album of all time.