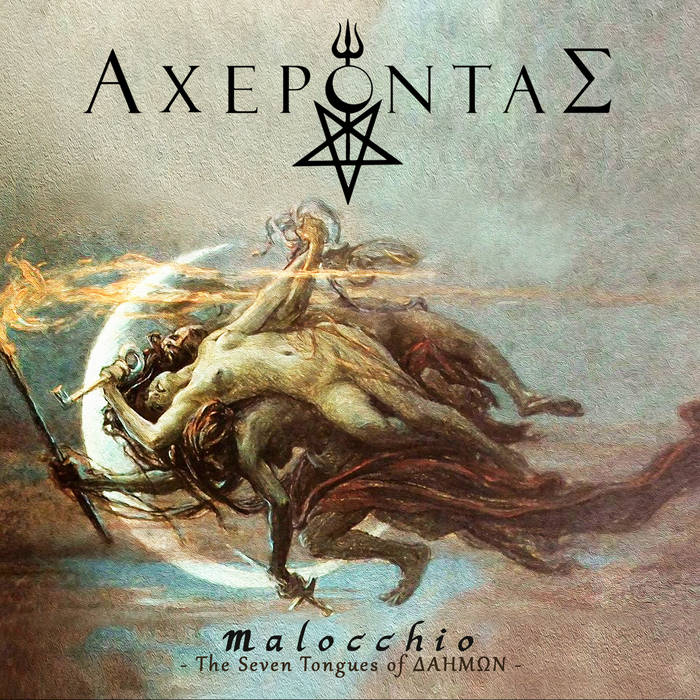 I lost the trace of Acherontas some years ago. As far as I remember, Amenti was much weaker than its predecessor. Vamachara had been a kind of promise from my point of view, an album that had given me the feeling this band could create something really big. Drama, intensity, triumph and everything else was combined skilfully. The music bordered on perfection every now and then. To take the final step seemed to be a matter of course, but Amenti proved the opposite.

Now, almost ten years later, Acherontas is back on my radar. Why? The answer is simple. Malocchio… is the album I expected after Vamachara. It spreads fascinating occult vibes and has a close eye on atmosphere. Yet this is not to say that heaviness comes off badly. The voluminous production guarantees a firm and steely foundation. Even a few almost dreamy parts do not sound saccharine in view of the more or less immaculate mix. But one can also expect a good sound. After all, Greece has survived its national bankruptcy of 2008. So there should be enough money for a decent metal production. And this is what we get here: thundering guitars, vigorous drums and non-sterile keyboards. Not to mention the passionate vocals that shine with a high degree of variety. Narrative parts, fervent screams, commanding speeches and throaty shouts, all these approaches can be found here. They reflect the different facets of the complex but not inaccessible tunes. Finally, the lamenting vocals at the beginning of 'Belial – The End Of Beliya’al' add an extraordinary oriental flavour.

Severity and melancholy shake hands during the 45 minutes, but the music never melts into self-pity. Songs like 'Satan – Exaltation Of Unbeing' take the listener on an intensive, stirring voyage. If you do not like this kind of rather melodic black metal, you should stay away from Malocchio and I admit that one or two solos are a bit too emotional for my taste. Nevertheless, if black metal is more for you than just the (of course great) icicle melodies from Scandinavia, you will like almost every second of the material. It sounds as if each musician of Acherontas has put his individuality in this work and thus it is almost logical that we receive a convincing album. The grandeur of 'Hecate – Queen Of The Crossroads', expressed especially in the fast sequences, recalls the best moments of sophisticated German forces like Geïst or Nagelfar (the latter, unfortunately, didn't have many of them).

The stylish artwork underlines that the Greeks do not intend to deliver a half-baked product. Everything is meticulously arranged, even though the absolute smasher, the song I want to hear again and again, is missing. So what? Malocchio transports spirituality, mysticism and authenticity and these features make the music to a kind of soundtrack for an occult ritual. From now on, Acherontas will get my attention again – together with roughly 1,979 further bands.