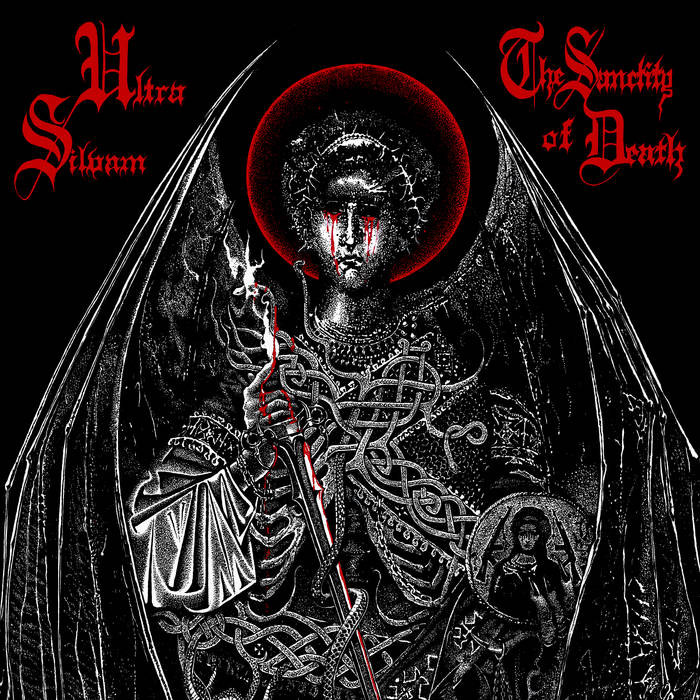 There’s something entrancing about young bands or relatively newer projects embracing vintage aesthetics and sensibilities. Though granted, in some cases it gets stale very fast as most trends do but then again those select few bands that both nail and expand on the sounds of old, are the best finds. Which brings us to Ultra Silvam, a relatively fresh band out of Sweden that gives their own spin to the sound and atmosphere of the first wave of black metal with the sinister mystique of modern Satanic black metal.

They do so with their sophomore opus, The Sanctity Of Death, released by Shadow Records / Regain Records. Ultra Silvam are a fairly young band that, as I stated, play a vintage style of black metal that’s more in line with the first wave of black metal, particularly early Bathory but this isn’t some basic or superficial worship band. Ultra Silvam take the sound of early black metal and deform it to make something new. That was the case with their debut The Spearwound Salvation, which was a worthy first effort but the production however, made the band sound a bit standard. For The Sanctity Of Death, the band successfully shed their more overt inspirations in order to evolve. Ultra Silvam’s style of black metal is very vintage sounding, not just the guitar tone and vocals, but in the songwriting too. This is very fast, very aggressive black metal, that has a clear groundwork in thrash and speed metal, which is also why, despite the record being very intense, there’s actual melodies and riffing / solo work are also steeped in classic heavy metal. That latter aspect is also evident in how the band don’t rely on just speed. There’s a varied display of speed, mid-paced bridge sections, and even some slower and very atmospheric elements, and despite the songs being on the shorter side, they still pack a very substantial and robust experience.

This is where the band shows how they are not just capable of recreating that vintage sound but expand upon it. The main way they show this is in the more atmospheric aspects and use of blasphemous choir like vocals, subtle synths, keyboards and other sound effects like bells to give that sinister vibe. This is the most apparent in the interlude instrumental track ‘Tintinnabuli Diaboli’, which has a darkly melancholic acoustic guitar melody backed up by a simple dissonant riff and bells. The more subtle aspect is also where the band expand the classic sound with more technical aspects like being more melodic and dynamic. Some of the riffs are somewhat reminiscent of Mortuary Drape, particularly how there’s a layering of a harsh melodic guitar, and a more complex shredding type lead. This technicality also extends to the bass and drums which complement the guitars and vocals evenly. Though it's clear that the guitars and vocals take center stage, the bass and drums are by no means are neglected. Considering this band are a trio and vocalist M.A. is also the bassist, it means every instrument and the overall performances have a specifically and carefully established place.

The final aspect where this band succeeded in the capture and expansion of classic black metal is the production. While it is true that black metal often benefits from a raw and gritty production to retain that authentic organic performance, there’s just so much a band can do with their sound, especially when their riffs are also melodic in areas. This was certainly the case with their debut, and they wisely improved on that by a wide margin. And by having producer Devo Andersson and engineer Marco S. Vermiglio, the band were able to polish their sound to perfection and make the music more venomous and punishing as the improved production didn’t sand off their edges, but sharpened them into a deadly blade of blasphemy.

Overall Ultra Silvam have improved in every area of their past work, the only major complaint I have is that while the sound and overall songwriting of this record is a massive improvement from their debut, the actual music is still in the same ballpark, but that’s something I’ve no doubt the band will continually improve upon in the future.