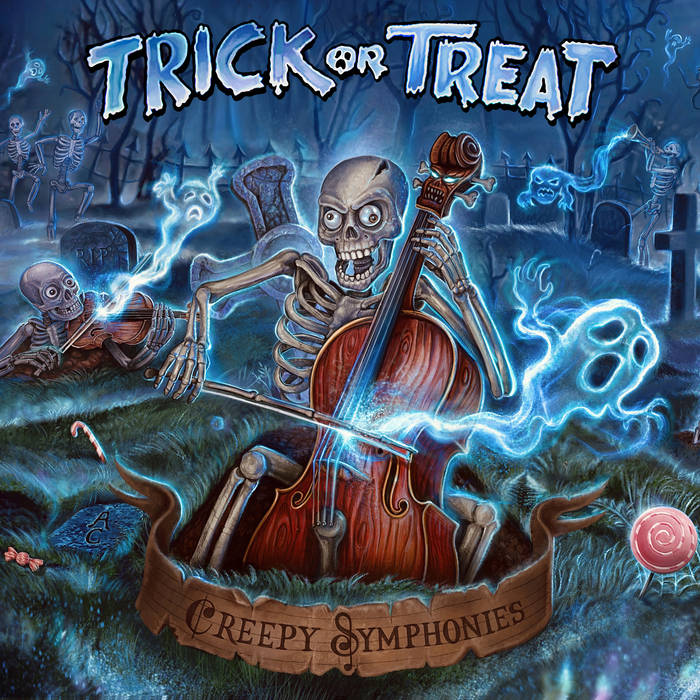 Now, this band has popped up on my recommendation list for quite a few times now, but I hadn't bothered to check them out until this release. Mainly because this was released on the same date as Dreamtale's latest album and I find the Finnish masters' release a bit of a disappointment. And bloody hell, by contrast this made "Everlasting Flame" sound even worse even though the two were, stylistically speaking, fundamentally different. And knowing my taste? Of course this one suits me far better.

Though Trick Or Treat started originally as a Helloween tribute band, and despite the fact that they'd never totally thrown off that influence ( I mean, which Europower managed that anyways?), this opus is definitely as enjoyable as it can get, and, of course, verily old school. The typical orchestral intros worked well to start that Halloween vibe by repeating the classic rhyme "trick or treat, trick or treat, give me something good to eat''. Then the title track jumped on with all the double bass drumming, fast trilling guitar riffs, highly infectious and upbeat chorus you can ask for in the genre. This might as well be released back in the 90s.The resemblance ran all the way from Helloween to Freedom Call. I mean, just listen to that little groovy verse as well as the over-the-top chorus in 'Crazy'. If you don't want to sing along I suggest you try another genre. Now, one of my favorite tracks on the LP is definitely 'Escape From Reality'. When the riff starts with quite the 'Eagles Fly Free' energy followed by shredding solo, I knew I was gonna love this one. The banging rhythm doesn't disappoint either. Generally I'm here for the speed, but the mid-paced rockers 'Peter Pan Syndrome (Keep Alive)' and 'April' actually sound quite... touching. Of course, Conti's voice is part of the reason why those two worked for me, but I like the whole swing feeling of the song too. Also, nothing can bring the album round to a nicer end than a bloody 11-min epic with all the energy of a simpler and more vocal-dominant Gamma Ray.

If you prefer Italian symphonic power along the line of Rhapsody then I wouldn't recommend this to you, but if you like the more simple and catchy yet also heavier German side of the genre, then try this by all means. And obviously, I'll stick with the old school stuff and call this a masterpiece.

Highlights: 'Creepy Symphony', 'Crazy', 'Escape From Reality', 'Falling Over The Rainbow', 'The Power Of Grayskull'