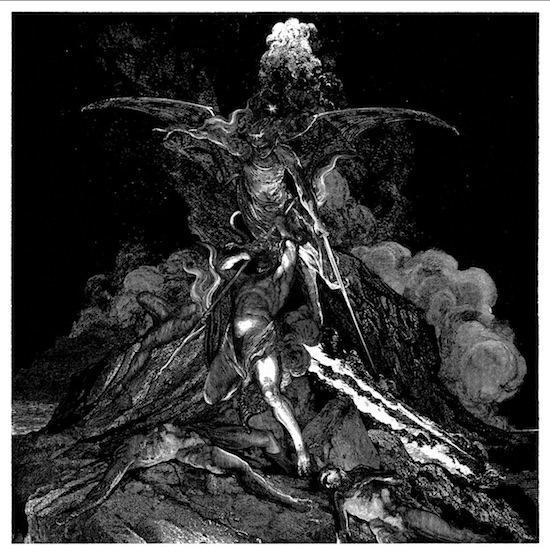 New releases of well-known black metal bands cast their shadows in advance. Watain and Dark Funeral are only two names that return in the next weeks. That’s surely a good thing, but the strongest source of power has always been the underground. Sidious from the United Kingdom have not been on my radar so far and I am surprised that they already released two full lengths. Nevertheless, I don’t think that they are already a firm and stable factor in the community of the sub-genre. Hopefully, Blackest Insurrection will change this.

The album presents 7 songs and clocks in at 47 minutes. These technical data indicate a more or less remarkable degree of complexity, but the twists and turns of the individual pieces do not hurt their flow. Sidious deliver homogeneous song structures; the material is accessible and it feels good to experience that we are not confronted with narcissists who just want to demonstrate their technical skills. The creation of a coherent song is always in the focus of the quartet whose drummer is also involved in Hecate Enthroned. The throaty vocals and sometimes pretty intrusive keyboards, for example in 'To Know My Kingdom' make me think of this band, but Sidious do not play symphonic or theatrical black metal. There exists a good level of harsh misanthropy in their music and almost hypnotizing sequences (the beginning of the closer) also do not come up short. I wish they would have given their songs a more bestial touch every now and then, but don’t understand this as a major flaw.

Unfortunately, there is a further problem. At the end of Blackest Insurrection, the band runs out of ideas, slowly but steadily. The vibrancy of the first songs cannot be recreated and that’s a pity, because the group starts with really good outbursts of hate. The opening title track spreads coldness while offering both high velocity parts and smooth guitar lines. It is one of these openers that draw the listener into the album in a matter of seconds due to its good, well-defined production, its dynamic and its pure blackness. Nevertheless – and this is good news – the highlight of the album has another name. 'Blood-Soaked Mist' welcomes the listener with rebellious guitar lines, intensive blast beats parts, cleverly arranged breaks and a deep and demonic heaviness. Even its calm break in the second half of the song works excellently.

The band tries to vary its songs within the given frame of the chosen genre. 'Hailing Shards Of Agony' and 'The Palace Yond The Threshold' deliver not only the guttural screaming of the lead vocalist, but also a triumphant, majestic voice and some joint background vocals and shouts. There is no Dimmu-symphony, no Cradle-kitsch and no female voices whisper words of dark eroticism. Instead, the band is – especially in the harsher moments – ugly enough to convey the genre-inherent scorn. Thus, I regret a little that the (still solid) last two songs cannot quite keep up with the first five tracks, otherwise it would have been an outstanding work. Either way, Blackest Insurrection deserves the full attention of every black metal fan who needs something different than the (fascinating) typical Finnish approach from time to time. Okay, Sidious are definitely not the most individual band, but they don't gaze at Scandinavia with their eyes wide open and saliva in the corners of their mouths either. Instead, they convey the soul and the aesthetics of black metal in the interface of Hecate Enthroned, Dark Funeral and old Enthroned. So now let’s see whether the announced outputs of the “big players” will find the right answer to this work.