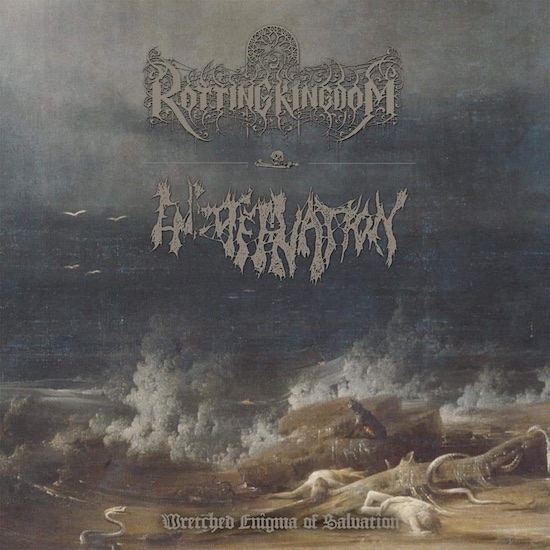 From thin air and deep within the whiff of rawest decomposition, spawned into existence is a most strange split LP between a now growing faction and an underground titan. Out through Selfmadegod Records is one of the most unexpected relationships, Encoffination and Rotting Kingdom split LP. A 4 track journey through rough, melancholic and accursed territory with Rotting Kingdom who only a while ago released one of the best melodic death/doom records and the monstrous Encoffination who unleashed upon the earth a most destructive burial chant, have come to usher in Wretched Enigma Of Salvation.

To start things off we have Rotting Kingdom gracefully offering their sacrifice in the form of the melancholic 'Misery Eternal' and the more agonizing, 'The Road Of Grief Ashes'. At first encounter it is easily noticeable that the songwriting has improved tremendously for Rotting Kingdom, not as if their prior efforts had been sub par, but the melodies and their seamless incorporation intertwined with the atmosphere is so soothing yet keeping with the expectation of what melodic death doom is, this rhythmic carnival sets the tempo excellently only for Encoffination to come along and pour a pile of bones and burnt flesh unto the tear soaked landscape.

Justin Stubbs continues to leave unbelievers speechless with his funeral movements and timings when it comes to applying the trance of exhalation within death metal. Anyone familiar with the desecration he has been involved in with the likes of Grave Upheaval would expect nothing less from one of death metal's most advanced and adept demigods. The scope and outlook of the record changes drastically from progressively bleak and bitter to a downright ugly formation via the howling gasps Justin greets the listener with. Totnally changing grey skies to a black fucking overcast of nothing. 'Glorious Decomposition' and 'Agonal Soul' overwrite easily the grief smeared by Rotting Kingdom due to the atmospheric tonality and sonic weight these tracks carry. Rotting Kingdom's work is great here but the godhand of Encoffination is too prolific to test. Thus, what was created here cannot be overlooked at any point in time. The highest degree and proficiency in death metal take stage for the listeners pleasure.