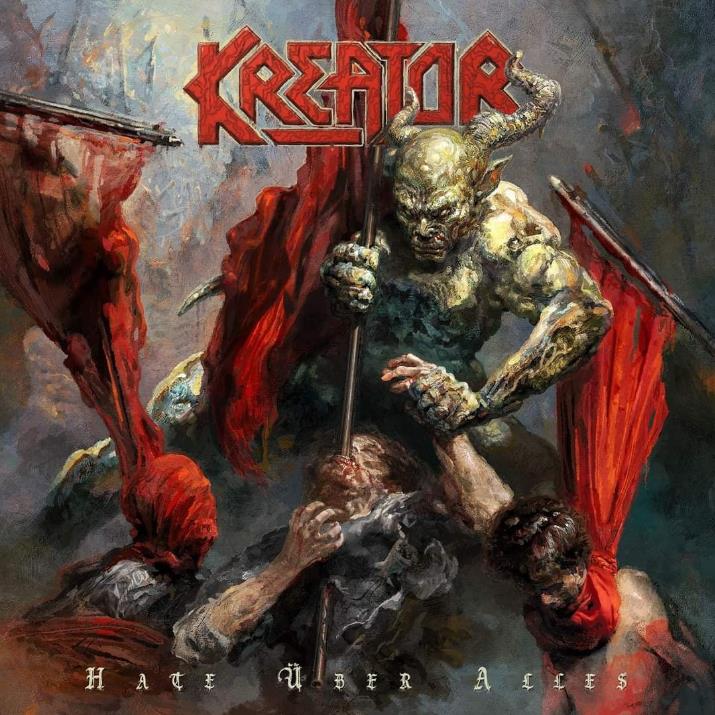 Kreator – maybe one or two of you may be already familiar with this name? Well, if not, that’s no problem. Their name is unfortunately much bigger than the music they offer today. Of course, Hate Über Alles will receive a lot of fanboy and Mother Theresa reviews and naturally some of you really like the album whole-heartedly. That’s okay, why not? But for me, the ridiculously titled Hate Über Alles is a pretty ambivalent album.

Yes, I said ridiculous. Hate Über Alles does not focus on aggression and hate. It’s an album that wants to walk the fine line between a certain dose of thrash and commercial considerations. Already this calculating approach does not fit the explosiveness of thrash. Apart from this, the material holds some truly embarrassing elements. 'Become Immortal' is a lame and powerless song with squeaky guitars, but it would be at least acceptable without its terrible “ohoho” sing-along section. And why does Mille sing “remember where you came from” on an album that has absolutely nothing in common with the early works of the band? Cynical parody?

But of course, nobody, not even me, expected a full-length that focuses on courage instead of commerce. At the end of the day, I accept the general approach of Kreator. They want to be in thrash what Maiden is in heavy metal and Scorpions are in hard rock – the absolute consensus band. Kreator want to be loved, no matter the cost. But does this excuse terrible soft vocal lines like those in 'Conquer And Destroy'? Not to mention the inadequate female vocals in 'Midnight Sun'. These kitschy duets make me puke since Theatre Of Tragedy’s “Schattentanz”, although here the lady sings in a more robotic than romantic way. The calm intro as well as a soft intermezzo of 'Pride Before The Fall' also want to ride the song in the shit, but at the end it reaches a solid level.

All these soft building blocks must of course be compensated. 'Killer Of Jesus', wow, what a provocative title! This is t.h.r.a.s.h. 2022, isn’t it? Well, maybe it is, but there shimmers a little lie through every tone of the album. Either you have integrity or not and it seems to me that Kreator once indulged their passion and now they do their job. I admit they do it with expertise and their technical skills are beyond doubt, but Hate Über Alles is a pretty lame result, if you use thrash standards. The level of energy is low and the same applies for the degree of dynamic. Nevertheless, a small number of good songs has crept in. To begin at the end: 'Dying Planet' is a sinister, heavy closer, far away from being a typical filler whose only function is to close the output. The mid-harsh 'Strongest Of The Strong' holds the strongest guitar work on a not very strong album. No wonder this track was put on the net as an advance track. 'Killer Of Jesus' is partly pretty intensive and okay, 'Hate Über Alles' marks a stormy and violent opener, but (and this is a big but) it does not represent the album. It screams: listen, people, we are so goddamn brutal! The infantile artwork wants to tell the same story. But this work is anything else but brutal.

It goes without saying that the production is more or less perfect. Hooray! It avoids sterility and that’s no matter of course when it comes to big players like Kreator with a great budget. I also do not deny that Hate Über Alles leaves a better impression than its formulaic predecessor. Some good sections shape an acceptable full-length, no more, no less. Is this the standard that Kreator set for themselves? Either way, all of you who like the album: have a good time with it, it’s metal and therefore it is okay. I will listen to something else.

The 15th studio album by Kreator has the most matching title one can unfortunately imagine for the year 2022. Hate Über Alles is quite provocative but gets all the shit happening these days to the point. On the other hand a homage to Dead Kennedys (and everybody who is wondering about such a "patriotic" title got something wrong with Kreator). So it is no surprise that the whole album deals with hate, war, brutalization and environmental destruction. Megadeth once sang "The Threat Is Real" - yes, it is but the threat is not drowning refugees in the Mediterranean Sea but us: everybody on this planet who takes part in the destruction of society and the environment through his / her behavior.

The guys around Mille make a clear statement about this issue in 'Dying Planet', the last track on Hate Über Alles and one of the tracks you have to get used to. It's a slow and creeping track about which Sami Yli-Sirniö told me that it could be their Celtic Frost track. So it is pretty obvious that you can find a lot of Swiss tunes in it. On the album are some more tracks that are not the old-school Kreator stuff so that Hate Über Alles became a more challenging album than the ones after Endorama. But before you stop reading now because of reading Endorama - I can assure you that you won't be disappointed. Kreator built in some more classical heavy metal riffing like in 'Conquer And Destroy' (Iron Maiden and Blind Guardian anyone??? ) or 'Become Immortal' with a lot of NWoBHM-flair, a slight kitschy "ohoho"-chorus and a really fantastic bridge part (and some autobiographical lyrics by Mille) and some quite dystopian tunes on 'Midnight Sun' combined with some female vocals from the German (pop music) newcomer Sofia Portanet whose album "Freier Geist" was Milles favorite album in 2020.

But of course there are a lot of quite typical Kreator tracks on Hate Über Alles like 'Demonic Future' with a lot of tempo changes and the typical drumming by Ventor. The title track which could have also been on Enemy Of God or Hordes Of Chaos, the more brutal albums from the younger past or 'Killer Of Jesus'. Another provocative title and the track starts with a short black metal-like intro. This one is a brutal and melodic song that really kicks ass.

The production is absolutely flawless. This time the guys didn't engage Jens Bogren but a quite unknown American producer called Arthur Rizk (who was recommended to them by Michael Amott) and I guess they made no mistake with that.

So, what's the conclusion? It takes some listening sessions to fully open up Hate Über Alles because they changed some things in their composing approach and don't repeat themselves (what they never did). The songs have a lot of melodic guitar work but nevertheless the album sounds pretty uncompromising. Of course it is no "Pleasure To Kill Part 2" but everybody who knows Kreator will not expect such a thing in the last 30 years.