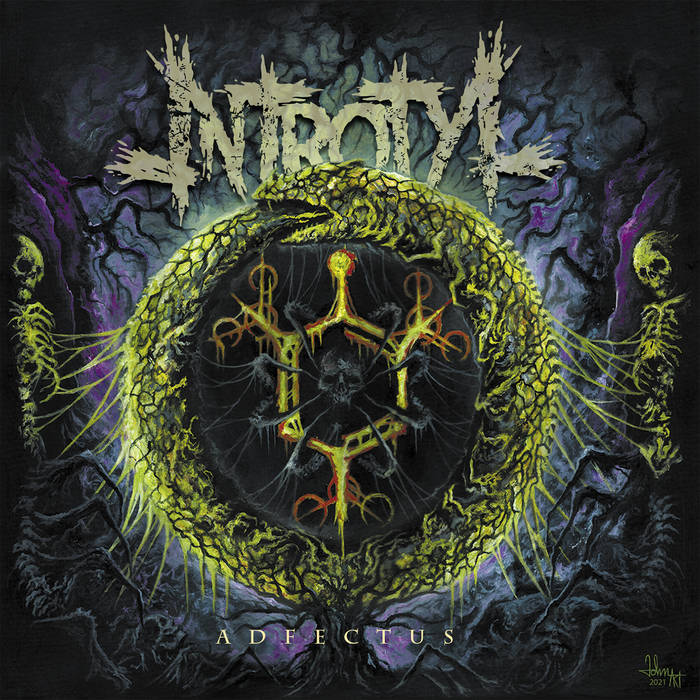 I first heard of this band in 2018, when they came to my hometown for a show. Sadly, I did not get to see them, but I bought the album regardless. First of all, an all-female death metal band from Mexico: sign me up right now! Plus, with song titles such as 'A Raped Brain' and 'Misanthropy And Madness', I knew I would love the message as much as I love the music. Musically, they don’t reinvent anything: it’s pure aggressive and heavy death metal, but they managed to make it sound new and old school at the same time. They remind me of Suffocation quite a bit. So, when I heard they were coming back for a show promoting their new album, I immediately bought a copy. Adfectus is their second full-length album and they basically continue where they left off on the last one. The lineup is also almost the same, except for newcomer, Annie Ramírez on drums.

As I stated earlier, they continue building their own sound. This means 30 minutes of brutal and relentless death metal. They still managed to evolve a bit, the songs are longer than on the first, and I hear a bit more variety and complexity in the riffs. This is not a technical death metal album though. There is no flamboyant two minutes solo; in fact, there is no solos at all! This would be my only complaint. Normally, I go towards more technical forms of death metal. What can I say, I’m a simple man. I like crazy solos in my metal. But honestly, it took me a few listens to even notice that, so it’s not a huge miss overall. They truly only focus on the heaviness and the brutality with slow and heavy chugging riffs. Far from being a death doom album, it retains some of the qualities of this sub-genre: mainly, the slower and downright crushing nature of the riffs. That said, it is generally way more catchy and groovier than death doom. The song 'Inner War' is honestly the catchiest death metal you’ll ever hear this year. All riffs sound really fun to play. Rose Contreras is a very talented guitarist and together with Sariux Rivera on bass, will crush you under the weight of their breakdowns. One thing they do really well is balance those slow parts with faster thrash drumming and death metal tremolo picking. I think what makes them both sound old school and new at the same time is their production. It’s clean sounding but still as a dirty, death metal atmosphere, like if you’re in a dark cave. Vocally, Kary Ramos is a beast of a vocalist. She reminds me a bit of Cannibal Corpse era Chris Barnes, with low and deep growls, but she is able to add a good amount of variety in them. For non-metal fans, they would never guess it’s a woman singing.

Now, for a totally unrelated sociological analysis part, for me metal is at its best when it comes from real sincere emotions, such as denouncing unjustifiable oppression, or talking about inner struggles. Usually, women know a thing or two about oppression and toxic relationships! The fact there are more and more women in metal is such a wonderful thing, it makes metal, as a whole, even stronger, richer and better than ever!

To get back to this review, you really feel the authenticity and raw rage all throughout the album, musically of course, but also in the lyrics. With lines such as “Believing your words, believing your lies, you feed on the pain you manipulate, you speak louder you cling to me”, they talk about the stalker or a toxic relationship. It is direct, to the point and full of honesty. You also have this one: “Immersed in chained memories, blinding our freedom the weak fall into this war that we have created the condemned still resists, breaking fear, breaking the chains threats disappear, the condemned persist I'm not in control, the chains hurt me.” I think in this they are talking about all the walls and restrictions we put in our own mind. They also throw a curveball with the song 'Flame', which is straight up a love song!

Adfectus is 30 minutes of really fun, catchy yet brutal death metal. Everyone is at the top of their game, musically and lyrically. If you’re a fan of Cannibal Corpse, Suffocation or any death metal that is brutal but in a fun way, this album is for you. Don’t miss out on these four badass women from Mexico!