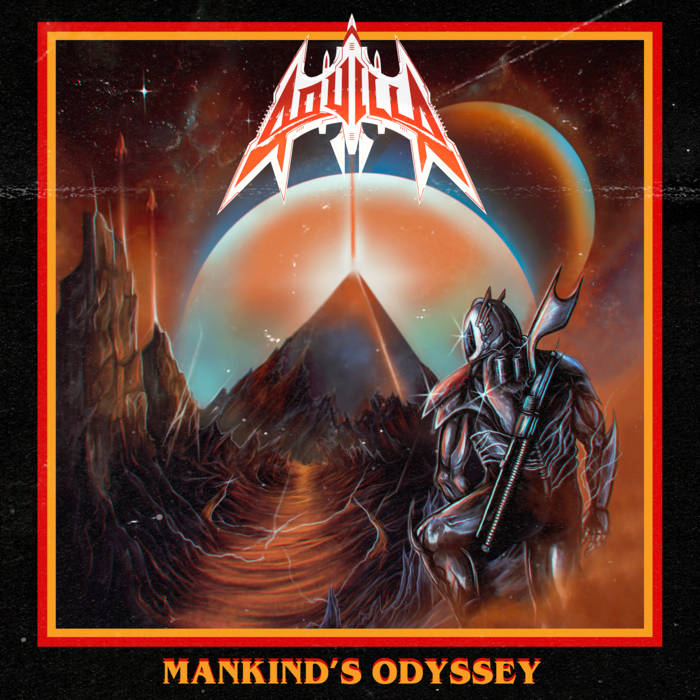 “Nothing is as it used to be

Humanity was forced to leave Earth and give its fate

To the last rescue mission”

What once sounded like some apocalyptic visions from some scientists like Stephen Hawking seem to become sooner the last chance for mankind to survive than anybody thought when you look at the desperate state our world is in these days. But of course Aquilla couldn't foresee how fast this may happen and made up a very interesting science-fiction story out of this topic which makes it really worth reading the lyrics. Also the cover artwork is a very dark, futuristic painting which reminds me a little bit of Dune. The booklet is designed in a 70s Buck Rogers- style (the characters) but the photos of Chris Scanner, Hippie Banzai, Blash Raven, Peter Slammer and Kriss Invader (where is Arthur Dent???) promise some cool 80s heavy metal stuff.

Our odyssey starts with a spoke intro where I stole my intro from. Thanks God it's not a boring epic Iron Maiden intro like the Brits did on their last album for about two CDs but the guys from Warsaw stark kicking ass with 'The Arrival'. Some punchy classic heavy metal guitar riffs let us settle home on our new planet and let us feel very comfortable there. Clearly you can hear some NWoBHM influences with the galloping guitars and the melodies but it sounds fresh and cool and have some similarities to the actual traditional Swedish metal scene. The vocals remind me a little bit of a slight deeper version of Joacim cans and fit pretty well into the setting. 'Pathfinder' is a song that rises its tension during the 5 minutes through some clever melody arrangements and breaks and the chorus is a really catchy one. 'Intersection' is another classic metal track with interesting hooks and some very cool guitar solos. The high-pitched screams combined with the regular vocals remind may be a little homage to King Diamond though the atmosphere of the songs isn't that dark as in compositions from our Danish legend. 'Saviors Of The Universe', the longest track on the album, shows as clearest on Mankind's Odyssey the bands Swedish influences – it starts with the riffs and ends with the vocal arrangements. But it's no copycat stuff and a very epic track to end the journey of the human race (okay, apart from the keyboard outro that follows). As bonus the band re-recorded their first single 'Zero' which they originally released in 2016 that deals with some Samurai stuff. It's a very nice idea to do so and shows that the songwriting skills since that time have grown. It's an okay song but I would prefer the newer stuff because of their finesse. Maybe a split with Japanese Significant Point would be a cool thing!

So is everything fine with the release? The semi-ballad 'Scarlet Skies' is a little bit too cheesy and predictable and the sonorous vocals sound much too over. This may be the weakest track on the album. Another song that doesn't convince to 100% is 'Rapt In Darkness'. Here the band tries to compose a little metal opera song with a lot of different vocal pitches and all this is a little bit too overloaded and hectic.

All in all Aquilla did a very good job with this album and if you are into classic British heavy metal and newer traditional metal bands like Ambush, Enforcer or HammerFall Mankind's Odyssey is something you will probably like. It seems that the guys invested a lot of passion into this album – starting with the booklet, the songwriting and ending with a very well-done and powerful production.