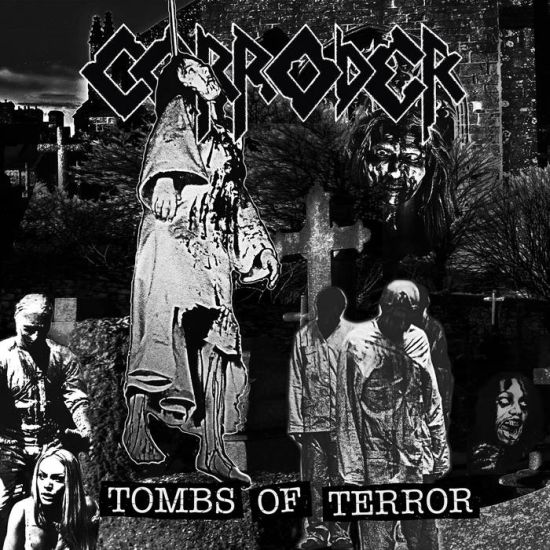 The screaming thrash metal drummer is back in vogue. It all began with Kreator’s Ventor (remember how he vomited out the words “Storm of… the Beast”, simply brilliant!) and I don’t think that we have already come to the end of the story with Corroder’s devil behind the kit who lends two songs his raw and ugly voice. Okay, his comrade at the guitar sounds even dirtier, but that’s no big deal at all. Both furious young men give their best with a lot of violent energy and, even more important, the musical content hits the mark as well. Admittedly, the word “musical” must be interpreted broadly, because even Demolition Hammer during their recording session of “Epidemic Of Violence” would probably have been blown away by the devastating whirlwind of Corroder. Of course, one gets used to their brutal, early Kreator-influenced thrash apocalypse, nevertheless it’s a demonstration of power. Maybe the Norwegians are the brothers in spirit of Sweden’s Eternal Evil. These dudes also love to kill everyone who have ever heard a song with a drum rhythm this side of the speed of light (in other word: a slimy poser!).

Either way, Corroder are an impressive example for the boiling thrash metal underground – and it’s time that the record companies get this band on their radar. No doubt, their approach is a teensy bit one-dimensional, but at least it is based on three pillars: inferno, more inferno and even more inferno. So what? The songs are coherently designed, the guitar sound is rasping and edgy, breaks are for wimps and - surprise, surprise - every now and then a nearly catchy line sends its rays through the contaminated wasteland of terror. You don’t believe it? Listen to 'Scorn For Scorn', for example, and you will find short guitar parts that will probably keep sticking in your ears. 'At One With Chaos' also provides some memorable sequences, although its name is slightly misleading. Despite the murderous tempo, the songs never lose their structure. I would even go a step further: they are definitely on a par with tracks on “regular releases”, both in terms of compositional abilities and manual skills of the musicians.

So what are you waiting for? It’s never too late to discover a new thrashing force, even if the artwork of their release sucks. I’m so tired of seeing hanging corpses and all this nonsense, but okay, let he who has never committed a youthful sin cast the first stone. Corroder is a promise, an obviously competent bunch of ruffians that cannot spell the word avant-garde, but they can turn their instruments into flamethrowers, Stalin organs and bazookas. That’s amazing! So enjoy the moment, it won’t take long until this sheer aggression will no longer be present, as experience teaches. That’s what I fear, just ask Ventor or compare “Endless Pain” with (the completely inaptly titled) “Extreme Aggression”.