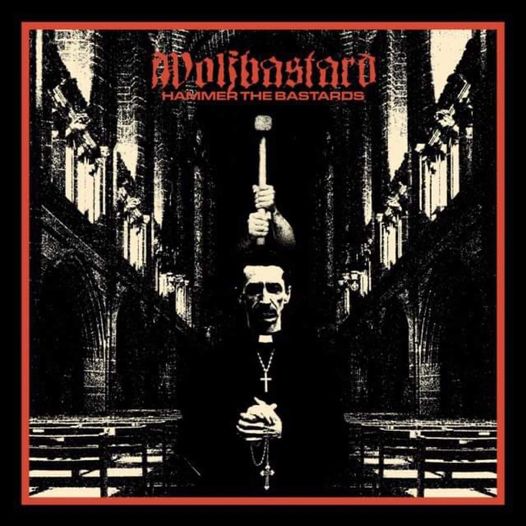 I like the straight, punk-affine aggression of crustcore. Breaking traditions from and with Driller Killer is absolutely fantastic. But Wolfbastard aren’t Driller Killer. Lo and behold, they do not even originate from Sweden, the role model country in terms of crust. These English dudes rumble along the avenue of slaughtered virtue in a pretty stereotype manner. They offer the genre-typical riffing, the hateful shouting does not separate them from other bands and the song patterns are ordinary. Of course, crust must be simple. It has not been invented to increase the joy of life of poets, flower artists or esotericists. Moreover, we don’t want to be too narrow-minded. Therefore I have no problem to say that Hammer The Bastards does not lack a proper (but not outstanding) degree of energy. It also holds a little quantum of filth in order to attract curious black thrash metal freaks. Nevertheless, the song material is almost painfully homogeneous. A certain degree of monotony cannot be ignored. Wolfbastard have a dictatorial approach. They do not allow their single songs the smallest iota of individuality. Surprising twists and turns? Feel invited to look for them, but don't point at me if you remain unsuccessful.

The production is okay, no more, no less, and to give honour to the truth: Wolfbastard avoid any form of major mistake in terms of their acoustic offering. They understand their main business up to a certain degree. By contrast, the violence-glorifying artwork sucks and song titles like 'Morbid F**King Hell' or 'Pissing On The Sacred Ground' appear quite silly. But well, no one expected a particularly subtle expression.

I cannot identify songs that I would call highlights. Those who like it direct, fast and without any frills can lend an ear, but usually I belong to this kind of music consumers and sorry, Wolfbastard did not fully convince me. No doubt, some good riffs have been integrated, but I miss some catchy moments that make it easier for me to find access to the material. As much as I regret it, there is nothing that keeps sticking in my ears, brain or heart and therefore the acceptable album needs binoculars to see the upper end of the rating scale. Perhaps the guys will score the next time with more elaborate songs, because I do not think that they fundamentally lack talent.