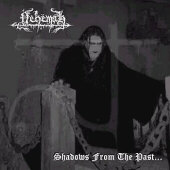 Nehёmah released three full lengths from 2002 to 2004. Both the quality and the quantity of their creative output made them appear like a great promise for the future. Moreover, the artworks and song titles like 'Black Winds Over The Walls Of Csejthe' underlined their true solidarity with the pitch-black underground. But this promise to the future remained unfulfilled. Today, one can say Nehёmah have become their own “Shadow(s) of the Past…”

France is well known for some very individual representatives of the black metal scene, but the here presented trio marked an exception to the norm. Two Scandinavian song titles show the band’s weakness for the Northern role models of the second wave and indeed, Nehёmah could originate from every black metal location. Their comparatively low fidelity sound has a tragic and apocalyptic note, but stormy, mostly ice-cold outbreaks are also available here. Therefore, I do not speak about “suicidal” or “depressive” black metal. Inter alia due to the raw, throaty and misanthropic vocals, Shadows Of The Past… does not have a whiny undertone and I am glad about it. 'Selvmord', for instance, holds a lot of sections that are not too far away from the ingenious noise Darkthrone created on “Transilvanian Hunger”. But the French trio also knows how to pen stoic rhythms at rest with themselves. From these follows, that none of the eight regular tracks (including the short outro) falls through the cracks – and we all know that such a coherent configuration is definitely no matter of course, especially when it comes to an album with a playtime of more than 50 minutes. By the way, the ninth song is placed on position 33 (stupid gimmick). It is Bathory’s “Call From The Grave”. Needless to say that the dudes from France stick pretty close to the original – as mentioned before, the Scandinavian scene was obviously a great influence. Quorthon cover no. 1.356, so to say, but who cares. It’s better to get 100 cover versions of a 100% classic than to get five of a 5% shit album.

Shadows Fom The Past… works as a whole. It is hard or even impossible to identify the best song of the album, because all of them are on a remarkable level. Additionally, they rely on more or less the same ingredients. The underground-affine production would have benefited from a slightly higher degree of power and directness, but this is nothing that really affects the overall impression in a negative way. The same applies for the melodies – they are expressive, but there would have been a little room for improvement as well. However, at the end of the day, Nehёmah’s work from 2003 is a strong piece of black metal. You can make a lot of wrong decisions in life but buying this album would not be one of them.