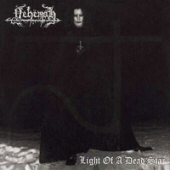 Type: Full-Length
Release Date: 2002
Label: Oaken Shield
Genre: Black
1 The Witch Burns...
2 Light Of A Dead Star
3 Across The Landscape
4 In October Nightshades
5 Nehëmah In Vulva Infernum
6 I Will Sleep With The Dragon
7 Misty Swamps
8 ...In The Heat Of The Flames
MetalBite on YouTube

Nehёmah from France was a band that split up after three albums. Its legacy has some great moments, but I cannot hide the feeling that their musical competence never reached the level of their spirituality. The black-and-white aesthetics, the minimalistic booklet, the pure design of their material and the lyrics always indicated greater things to come than those that the band really offered. Light of a Dead Star was a good debut, no less, but also no more.

Why does the album not completely work? Well, first of all, the band has no feeling for compactness. I don’t say that 'Misty Swamps' lacks substance, but it would have been a great idea to bring it to an end after seven or eight minutes. The real configuration (the song crosses the twelve-minutes-mark) is simply too long and the following atmospheric outro also does not add much value to the full-length. (By the way, its name '…in the Heat of the Flames' is misleading, because to me it rather sounds like it’s raining during the complete outro, if I am not mistaken. But maybe I should ignore such details.) But intro and outro aside, we have six songs that result in a playtime of 49 minutes and I can only say that these technical parameters are rather a handicap than an appetizer. However, the first regular song (simultaneously the title track) causes a vehement Norway-influenced storm which illustrates that Nehёmah consists of men of conviction. Despite the well-known icy guitar leads, the horde tries to score with originality. The bass guitar gets room to play a prominent role, but its lines are overly simple and pretty boring. Anyway, the title track features more or less pure violence.

The dignified 'Nehёmah in Vuelva Infernum' shows the other side of the band. A dark riff carries the entire song. It creeps maliciously onwards, aware of its own inner strength and nightly aura. This kind of doomy black metal depends crucially on the quality of its riffing and fortunately, the French quartet does everything right here. Even the rather unspectacular drumming contributes to the overwhelming appearance of the song. So let the sinister vibes take you away… and realize that the strong and mid-harsh 'Across the Landscape' also holds a fantastic atmospheric instrumental part where the usual soundscape is supported by mystical keyboard sounds. Thus, it’s only logical that 'In October Nightshades' does not intend to stand in the shadows of these highlights. It offers a nice mix of pretty ravenous wrath and wicked, mid-paced meanness.

A lot of things on this debut point in the right direction. The mostly guttural vocals, the general musical understanding that brings some spooky melodies to light, the technical skills, the adequately blurred yet somewhat ghostly production – all these elements work. Nevertheless, the full-length does not breathe the air at the top of the mountain. A few parts have become too excessive and due to this, they lose some percent of their power. But don’t get me wrong - if you like to dig out a black metal work from France without 10.000 musical experiments, this one could be the right thing for you.