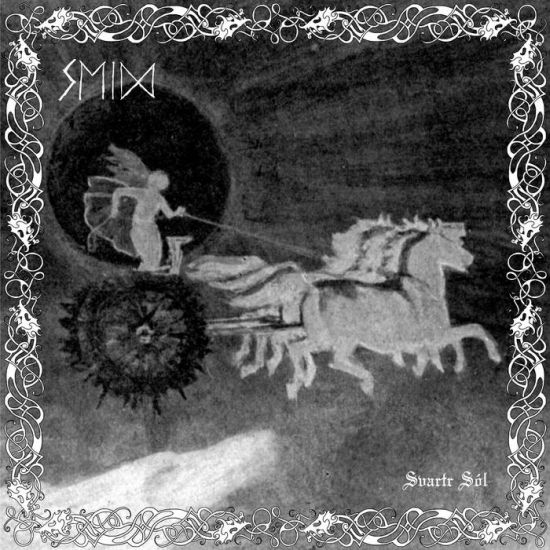 Seid from Sweden seems to be overlooked by too many black metal fans, at least this is indicated by the low number of reviews. That is a bummer, because the band is getting better and better, even if only in small steps. Svartr Sól, their fourth full-length, is no perfect work, but it offers much more light than shadows and an upward trend is always pleasing.

Let’s talk about the dark spots at first. Honestly speaking, there’s not much to moan about. But if we want to be picky, we can mention the not very natural, a bit blurred sound of the album (on the other hand, I admit that this is a pretty individual production). A smaller dose of reverb on the vocals would have been better from my point of view and sometimes the unstoppable double bass drum appears somewhat mechanic – less would have been more in this context. Anyway, there is nothing that has really gone wrong, it’s rather a question of the final touch. Either way, let’s focus on the positive sides of Svartr Sól. I promise there are more than just the stylish artwork with the rolling chariot.

Seid have brewed a nice mix of strong, sometimes even very strong melody lines, a profound blackened approach, a few Viking ingredients and a proper degree of velocity. Maybe the album does not sound overly atmospheric, but it presents a good mix of the aforementioned elements. Given this situation, it does not come as a surprise that some songs leave their mark impressively. 'The Great Flame Rises' for instance, can rely on a captivating, forward rushing melody which embraces the listener right from the beginning. 'Windows Everywhere' combines pretty icy leads with very intensive parts, but there are less furious parts as well. The dudes strive to let their personalities flow into the songs and the result sounds pretty autonomous. Of course, the band did not fall to earth from a distant galaxy, but I cannot identify a dominant influence of another band on the sound of the Scandinavians. 'The Vessel' mixes very generic (and extremely good) leads at the beginning and the end with, among other things, clean, quite harmonic vocals in the middle section.

The pretty monumental and almost overlong closer embodies a dense and monolithic form of sonic desperation. Its lines have a nearly hypnotic effect and I am sure that the main melody of the song lies in close proximity to that of a song I already know - but sorry, I can't get the name of it. And I guess that’s. However, it is probably irrelevant, because the song stands on its own feet and I am sure that Seid did not have the focus on the creation of an imitation. Anyway, these nine minutes house a great variety and demonstrate the compositional progress the band has gone through. So, no doubt at all, those who belong to the curious and open-minded parts of the global black metal legions should give this output a chance. The sometimes pretty gloomy Svartr Sól is free from useless experiments, but full of ambitious material.