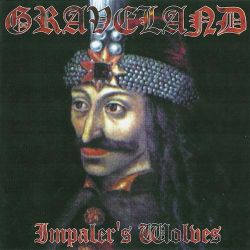 The respected colleagues who have written the first reviews for Impaler's Wolves have already mentioned that the EP houses the re-recordings of two songs of the debut, but I do not intend to draw comparisons between the original and the new versions. Just let me focus on the here presented songs exclusively. First of all, both cross the ten minutes mark. Seems as if the epic heart of Darken cannot be suppressed. Furthermore, the sound gives no reason for complaint. Equipped with a dark and archaic touch, it is slightly undifferentiated, but very atmospheric and all of you who are familiar with Darken's approach know that atmosphere has always been the most important feature for him. His elegiac albums paint medieval pictures in a very clever way. The same goes for 'Impaler Of Wallachia', the first rerecorded track.

This anthem for Vlad Dracul is built upon a very robust metallic fundament, but it goes without saying that many atmospheric elements are integrated. Ravens caw, bells ring (and they are the characterising element of the most intense part of the song), timpanis rumble. Anyway, some strict speed sections tighten the reins and the hoarse, somehow incorruptible voice contributes a great amount of eeriness. All in all, the song is as impenetrable as the Transylvanian forests and its aura matches the mood of the picture in the small but nice booklet. A lonely covered wagon is on its way in front of mighty, wooded hills. In simple terms, a very good song that fulfils its purpose excellently.

'In The Northern Carpathians' takes the same course as the opener. Darken would not be himself if he had composed two songs with a significant different style. Voluminous keyboards liaise with straight lead guitars and a lot of tempo changes shape a dynamic and exciting titan. Not to mention the atmospheric elements; of course, they reappear as well. In terms of his compositional skills, Darken is like a Cyclops: a powerful giant - but he has only one eye with the effect that he does not see many options to vary his basically forceful approach. Nevertheless, these two songs deliver value for money and the EP is more spirited than some of the Graveland albums which deliver a neverending stream of mid-tempo rhythms. It is therefore recommended for those of you who like mid-harsh, not overly complex black metal with spooky vibes and an epic tendency.