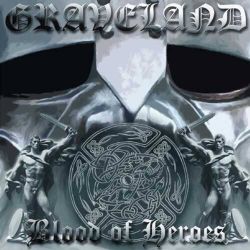 Type: EP
Release Date: 2004
Label: No Colours Records
Genre: Black
1 I Am What They Fear
2 Blood Of Heroes
MetalBite on YouTube

Blood Of Heroes appears as the logical continuation of the preceding full-length Memory And Destiny. Once again, Rob Darken has created a mixture of Valkyrie-like background choirs, fairly simple yet elegiac melodies, mid-paced rhythms and raw lead vocals. Well, some might say that he uses Nazi-influenced aesthetics. I agree that the symbolism of "heroes" and the artwork point in this direction, just have a look at the sculptures on the cover artwork. They seem to be creations of Arno Breker, the controversial artist who made, inter alia, the sculptures for the "Neue Reichskanzlei" of Adolf Hitler, also known as the undisputed king of megalomania. But the Nazis do not have the monopoly on heroism. With that said, let's put the spotlight on the music again.

Graveland follow consequently their musical philosophy. The almost bombastic soundscapes want to hypnotize the audience. Due to their sheer opulence, the songs intend to overwhelm the listener. Yet there is a little problem. Usually, it is a matter of course that quality beats quantity. But in the case of Graveland's approach, it takes time to dive deeply into the antique world of Darken. But just at the time when I arrive at the cold forests of Darken's universe, the songs have already come to an end. Hence follows that the two pieces of Blood Of Heroes do not have the same effect as the tracks of the preceding full-lengths. The albums can rely on the fact that the whole is more than the sum of its parts. But this principle does not work with regard to an EP with only two songs.

Production-wise, Blood Of Heroes does not set new impulses. Its full and warm sound is already well known from the previous publications, but at the same time, it appears as an exactly fitting, tailor-made solution for the musical visions of Rob Darken. Therefore, there is no need for a change. As a result, this limited EP offers two decent, but not essential tracks. If you have missed to get a copy, rest assured that there are better reasons for suicide.