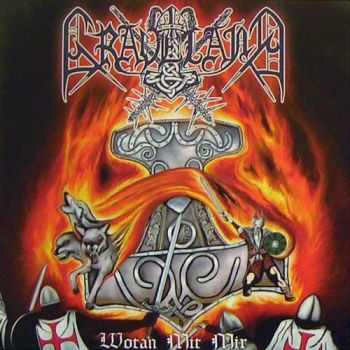 Wotan Mit Mir offers another strong release of Rob Darken, although its cover is defaced with a kitschy artwork, probably created by a talented five-year-old boy. So what? It goes without saying that all of the typical trademarks of Graveland's sound show up again. The listener enjoys dragging rhythms, endless guitar lines, heroic background vocals, pompous keyboards, raw lead vocals and - to mention the probably most important detail - an archaic atmosphere. One might say that Darken walks really well trodden paths. But it is also a matter of fact that he masters this kind of music in a very skillful way. I don't need surprising modifications of his style. Instead, I appreciate the fact that he is a reliable partner for his supporters. More of the same is not the worst dogma as long as a band writes good songs.

The tracks on Wotan Mit Mir do not lack of darkness, dynamism and drama. Once again, Darken heralds the glory of long forgotten days in an almost imploring manner. While finding the right balance between melodic lines and harsh elements, he avoids unsuitable or abrupt breaks. As always, the coherently arranged songs appear like a long and silent river. Well, not completely silent. I hope you know what I want to express. The pieces score with this specific kind of perseverance and the longer they proceed, the more they grow on the listener until they drag him into a medieval scenario. In particular because of the homogeneity of the song material, this well designed 12" develops its full effect.

Irrespective of the celestial vocal performance of the seemingly restless Valkyries, which appears slightly synthetic, the sound does not show major flaws. The production is more or less well balanced and does not try to impress with a modern mix. The focus on a fairly natural sound matches the (non-German) lyrical approach. With regard to the importance of a correct overall impression, any other way of proceeding would have been a bad idea. But Darken is no rookie. He knows how his music must sound and that is exactly the reason for the suitable production.

What did I forget? Well, the red vinyl is a matter of personal taste, but the two and a half songs are fine. In terms of quality and style, they are doubtlessly on an equal footing with the majority of Graveland's further pieces. They would therefore have deserved a place on a regular studio album. But due to the chosen format, they are at risk to be overlooked and this would be a pity.