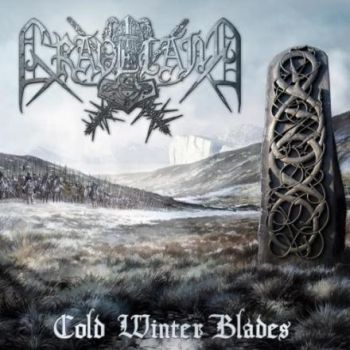 Type: EP
Release Date: May 11th, 2010
Label: No Colours Records
Genre: Black
1 In The Morning Mist
2 From The Beginning Of Time
3 White Winged Hussary
4 Spear Of Wotan
5 Dance Of Axes And The Swords
MetalBite on YouTube

For many years, Rob Darken follows the "more of the same" dogma. He repeats his beloved song formula again and again and this way of proceeding does definitely not reflect an adventuresome mind. But as a consumer, you know exactly what you get when buying a new Graveland album. It is therefore a matter of course that Cold Winter Blades also leads to the archaic realm of Darken's fantasy. Far from civilization, coldheartedness reigns over empathy and peace is no value in itself. The cover visualises this atmosphere in a very good way.

As expected, all of the usual ingredients of Graveland's sound show up. The dragging rhythms mirror melancholy, isolation or combativeness, Darken's conjuring voice adds a cruel note and the background choirs have been directly imported from Valhalla. Due to the broad mix, the overall impression does not lack of mightiness. There is, however, one small restriction, because the snare drum sounds powerless and thin. Aggravating this situation, the drum computer - or is it actually Darken himself, as it is written in the booklet? - sometimes seems to play a different song instead of being aligned with the other instruments ('The Morning Mist'). But who wants to be pedantic?

Due to the stylistic perseverance of Darken, the mixture of new and rerecorded tracks works in a surprisingly homogeneous way. The tracks possess the predictable yet amazing degree of coldness and hostility, albeit the third number comes as a semi-ballad. Perhaps Darken really knows only one composition scheme, but this does not mean that he works carelessly. Within the narrow limits of his approach, he tries to vary the songs. Even sharp critics must admit that he is successful in this respect. On the one hand, the 35 minutes of Cold Winter Blades do not overcharge the listener. On the other hand, they also do not appear tritely. Hence, it can be concluded that Darken has found the right balance between variety and recognisability. Only the remix of 'Dance Of Axes And Swords' fails to reveal new aspects of the song.

The publication of Cold Winter Blades makes sense with regard to the fact that two of the three newly recorded tracks originate from compilations. I doubt that these pieces have received much attention so far. But even if I am mistaken, the strong and rustic 'From The Beginning Of Time' marks another jewel in every Graveland collection. Only those of you who never felt the need to get in touch with the Polish one-man show may rest assured that they do not miss anything.