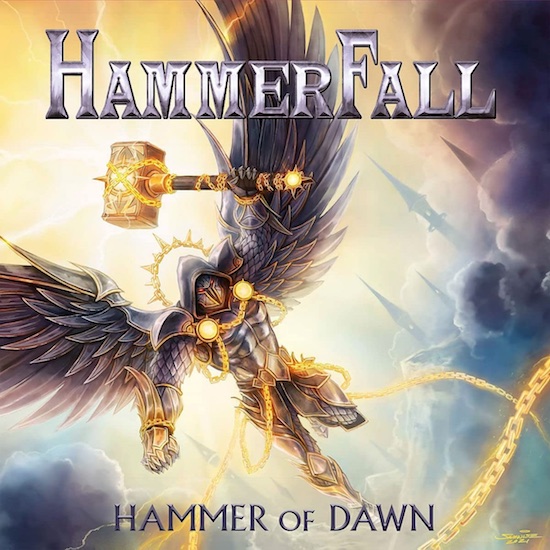 I think we can all agree that Hammerfall is one of the most generic power metal bands out there, always playing out to the stereotype. Usually, I’m all for consistency in style but with more riff-dominant bands like Hammerfall, they tend to be a hit-or-miss, depending on whether or not the riffs catch my attention in the first few seconds. I mean, hell, I hold Crimson Thunder and Infected in higher regards than most would. So I guess I find this LP with some decent riffage and soloing. But the rest are still a huge meh.

Their last release Dominion had leaned more on the heavy metal side, while this one is more of a nod towards their Threshold days. And maybe 'No Son Of Odin' and 'No Mercy' could work on Renegade with its speedy riffing. The overall speed has actually gone up, and the riffs are a bit more complicated than the last release. The melodies had gone a shade more upbeat in songs like 'Too Old To Die Young'. Of course, all the chorus are catchy and brainwashing as hell. At least they didn’t apply more synth than usual, as was my fear when their first single came out. And admittedly, I was well impressed with the ballad 'Not Today', the guitar just “sang” most beautifully - this one will beat 'Glory To The Brave' yet. Dronjak’s guitar playing always sits well with me. I always wonder whether or not he is the only reason why I listen to Hammerfall these days, especially on songs like 'Reveries'. Honestly though, Joachim Cans’s vocals still bore me. He plays it too safely for my liking, and although his natural vocal range is pretty high, he just sounds too thin. And don’t even get me started on the flat and merely serviceable drumming.

Now, I’ve come to ignore Hammerfall’s general lyrics. They’ve had their fair share of dragon slaying and demon hunting, plus their typical cheese about pride of being a metalhead. I mean, 'Brotherhood' is supposed to be the ultimate power metal anthem, right? And of course, a Hammerfall album without a song about some sort of hammer or the hammer doing something would most certainly be incomplete. That much I can appreciate, but the chorus on 'Reveries' is the ultimate WTF moment for me throughout my listening of the album. When they started the said track with Na-na-nas, I thought, okay, maybe they expect us to sing along. But then they used it again for the chorus, all I want to ask is one huge “WHY?”. Even the bridge on 'Venerate Me' can’t beat that one. It just gives me the feeling that the band was working to a deadline and ran out of lyrical ideas, so they just filled the chorus with Na-na-nas and hoped the fans would buy it. I don’t.

With all due respect, Hammerfall just doesn’t work. I fear they will always be that band with a few legendary works amidst their mediocre discography for me. I suppose this one actually exceeded my expectations of them- there are some quite banging riffs in the more old school style after all. And I can’t resist such catchy choruses. But those impressive moments don’t amount to much in the end. I can’t, I just can’t.