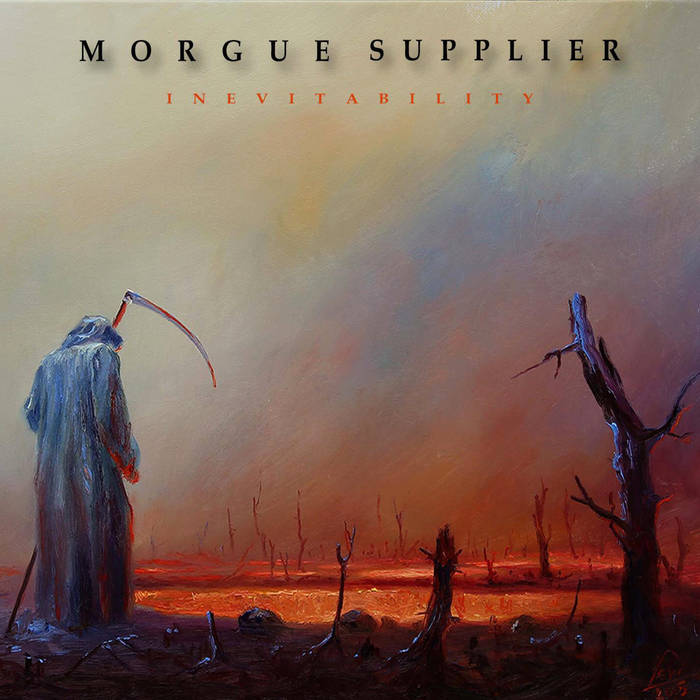 Morgue Supplier isn't your average death metal band. Not at all.

In a veritable sea of what can churn out otherwise pedestrian or mundane metal music that is one-dimensional at times, for whatever reason or ability known only to the band, MS just defies convention and takes you on...a journey. The latest release, Inevitability, sets the course for putrid death metal with a touch of style that taps into all areas, foreign and domestic.

You can hear the myriad of influences in these tracks; dare I say there are some groove-oriented passages within tracks like 'Closing In'? The bass in this track is especially wicked, building an organic sense of definition and style that drives the track home hard, saying nothing for the purely pained and wailing vocal that is a perfect fit for the music. The amazing component to this album (and the band, really) is that the style is most assuredly death metal, but each tracks seems to find an expansive element within the limits of the genre and amplify them accordingly. It's been my longtime assertion that you don't get a band like MS too often, and when you do, you revel in it, experience it – much like one would any piece of art that appears confusing to those outside the ring.

There is a definitive style to Morgue Supplier, and if you understand and explore the 'fringe' elements of our chosen music, you'll enjoy them all the more. 'Departure (Interlude)', as an example, shows a structured darkness that you can't help being sucked into, much like a black chasm entices and suffocates its willing prey. Without delving too much into written theatrics here, a track like this breaks up the flow of the album, and it's all the better for it. It's like a short glimpse into reason, however distorted it may be, only to be slapped back to this horrid reality of 'My Path To Hell', which, again, balances the beam between battering death and a psychedelic slant that has guitars bending and swaying at will to some force above and beyond our ears. What might otherwise appear out of place or unnecessary is made potent and undeniably important. There isn't a wasted note anywhere on this album; some people will get it and be transfixed and others just might not be ready for something so swelling. Christ, the ending title track alone, a haunting instrumental that leaves you visualizing some epic jaunt through a sci-fi death chamber, is enough to tie in the full entity that is this record. Simply amazing on many levels.

I can go on and gush about an album I find to be all-encompassing and vital to the genre, but I will stop short of such inanities and just implore you to check these guys out if you aren't familiar with them. The back catalog is just as potent, believe me, but this is one of those examples of a band getting stronger and more fluid as it goes along. The vocals are a harsh slap to the face, offering nothing but violent dirges bellowed out in rancorous tones. Musically? The band is as tight, well-rounded, and true to the feel as one could hope. There's no pretenses here, no filler, no mono-syllabic rubbish for the sake of space – every track on Inevitability suppresses the mind, invades the psyche, and demolishes the will – follow this music as its intended and the journey will take you places that will haunt and delight even the skeptical denizens among us.

Top-notch death metal – Chicago style! This is what makes our city prideful.