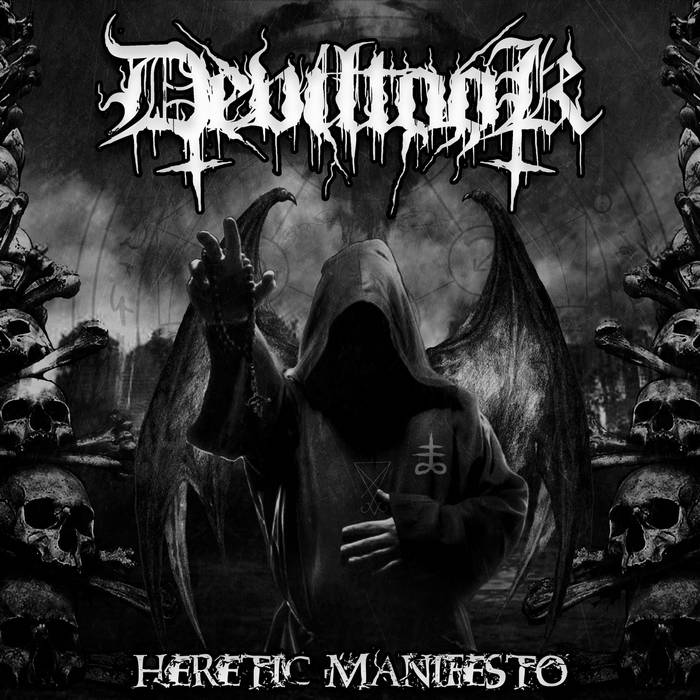 At War With Gods was the first statement of Deviltook, a Spanish unit which deserves more attention than it had so far. Why? Well, they perform their black metal in a cool way, without useless fat, extras and frills. Thrashing elements play a more or less important role, too. Nevertheless, the new album Heretic Manifesto salutes from the cold, barren landscapes of black metal. 'Pagans Roots' is one of the tracks that leave no doubt about the sinister mentality of the quartet. The preacher that appears two times gives the strong track a doubtlessly black colour and song titles like 'Adventum Lucifer' do the same.

The riffing is not mega-expressive, but it gives the songs a clear direction. The band avoids surprising twists and turns, but dynamic tempo shifts do not come off badly. Boredom cannot spread its foul aroma during the 35 minutes of malicious music. Okay, extraordinary ingredients are missing and so some might say that the album lacks individuality. I disagree, because the ten tracks are well aligned with those of the debut. Thus, this is precisely the music the name Deviltook stands for. But even if you miss a higher degree of personality, you can still enjoy this album very much – at least if you also like the last two albums of Finland’s Urn, for example. The same goes for those dudes who celebrated their last black mass to the sounds of Deviltook’s compatriots of Nuclear Revenge.

The vocalist does not offer a large range of different tones, to express it politely. His hoarse screaming is rather a stable factor in the sound of the horde. Every now and then, he shifts into a very deep, demonic pitch, for example in 'Non Serviam', but usually he feels at home in his one-tone-approach. At any rate, he sounds more adult than on the debut and he avoids ups and downs. The same applies for the entire material – Deviltook present an album of uniform quality. Of course, some songs are good, some are a tiny bit better. The rapid 'Wolves Of Kali-Yuga', for instance, belongs to the most impressive songs, due to its occult ingredients, its raw appearance and its coherent flow. But I would not call it a highlight, rather the first among equals. The following 'Adventum Lucifer' is also cleverly arranged. It puts a simple guitar line in the focus that does not miss the desired effect.

The album is properly produced. It fails to boast with a very broad sound, but it can rely on its raw undertone and it sounds neither blurred nor dull. The simple formula is that the full-length sounds okay – but the artwork is really great again, just like the one of the debut. So I see and hear no improvement and no deterioration. Deviltook stagnate. So what? Already their debut catapulted them on a high level and maybe their third work will show that this good band can turn into a fantastic one.